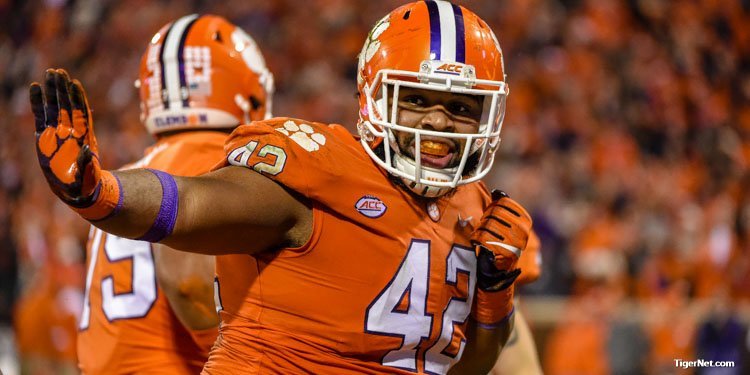 Christian Wilkins shows a Heisman pose after his first half touchdown

CLEMSON – A night of records and fog.

No. 2 Clemson entered Saturday’s night rivalry game as the heavy favorite, and even though the offense did its part the defense was torched and blistered for much of the night and the result was a 56-35 Clemson victory that gives the Tigers five consecutive wins in the series.

Clemson improves to 12-0 while South Carolina falls to 6-5. Much of the second half was played in a dense fog.

None of it was pretty or easy – Clemson quarterback Trevor Lawrence led a balanced Clemson attack, throwing for a career-high 393 yards as the Tigers put up 744 yards of total offense. It’s the most passing yards for a Clemson quarterback in the history of the rivalry. The Tigers had 393 yards through the air and 351 on the ground.

However, South Carolina quarterback Jake Bentley threw for a career-high 510 yards and a career-high five touchdowns, the most yards by a Gamecock quarterback in the history of the rivalry. The Gamecocks had 600 total yards of offense, and the 35 points were the most given up by the Clemson defense this season.

“I’m so proud of our team. It’s so hard to go 12-0," head coach Dabo Swinney said. "It’s only the third time ever that’s been done here. Also, what an amazing accomplishment for this team to achieve something that hasn’t been done in my lifetime by beating South Carolina five times in a row. Give South Carolina credit for making plays and continuing to compete. At the end of the day, our team was too strong across the board. I take my hat off to my players and staff to win a rivalry game by three touchdowns.”

Swinney said he was proud of the offensive performance.

“That was an amazing performance by our offense. Trevor [Lawrence] was unbelievable in his first rivalry game," he said. "Our receivers made tons of plays. Hunter Renfrow made some amazing plays on third down. Our offense played maybe its best game of the season and had great balance. All of our running backs ran well, and our offensive line dominated and gave up no sacks.”

The Tigers responded on the ensuing possession. A 23-yard pass to Hunter Renfrow – making his school-record 44th start a wide receiver – set up a one-yard scoring run by Adam Choice, and with 6:17 to play in the first quarter it was tied 7-7.

On Renfrow’s catch, he surpassed 2,000 career receiving yards, becoming just the 13th Tiger in history to hit the milestone.

The Gamecocks picked up an initial first down on their next drive but were soon forced to punt, a punt down at the Clemson 5-yard line. What followed tied for Clemson’s longest scoring drive of the year, a drive that covered 95 yards in 10 plays. The score came on a 22-yard strike from Lawrence to Tee Higgins – who beat the corner on a skinny post – and Clemson led 14-7 with 17 seconds to play in the first quarter.

The Gamecocks once again drove down the field and had the ball inside the Clemson goal. Facing a 4th-and-goal at the Clemson three, the Gamecocks elected to go for the touchdown instead of the field goal, but Bentley’s pass to Bryan Edwards was high and the Tigers took over on downs.

What followed turned into the longest scoring drive of the season, covering 97 yards in 12 plays. The Tigers marched steadily down the field, and facing a third-and-goal at the three brought in the Fridge Package with Dexter Lawrence and Christian Wilkins lined up in the backfield with Jackson Carman lined up at tight end. Wilkins’ effort was a yard short of the goal line, and the Tigers gave it to him again on fourth down and he bowled over the right side for the score. With just over seven minutes to play in the second quarter, Clemson led 21-7.

The Gamecocks answered right back. Facing a third down at their own 33, Bentley rolled to his left and found Kiel Pollard in the middle of the field. Clemson safety Tanner Muse overran the throw and the lumbering Pollard scored easily to make it 21-14.

The Tigers didn’t take long to answer, putting together a five-play drive that covered 70 yards. The key play on the drive was a 42-yard run by Lawrence, a run that set up a two-yard scoring run by Choice. With 4:49 to play in the half, Clemson led 28-14.

What followed looked bad for the Tigers. The Gamecocks needed just one play to score – a 75-yard pass to Deebo Samuel that made it 21-14 – and Clemson followed with a punt and a missed field goal to close out the half. Following the punt, JD Davis intercepted Bentley to put the Tigers in prime position, but Aamri Rodgers was called for offensive pass interference on an apparent touchdown and Justyn Ross dropped a sure touchdown. Greg Huegel missed a field goal with 30 seconds left, and the score was 28-21 Clemson at intermission.

The Tigers came out firing to start the second half, putting together a 10-play, 75-yard scoring drive. The Tigers ran the ball eight of the ten plays, the last one a two-yard scoring run by Travis Etienne. The touchdown was the 18th rushing touchdown of the season for the sophomore, the most in program history. Etienne also surpassed 2,000 career rushing yards. With just under 11 minutes remaining in the third quarter Clemson led 35-21.

A promising South Carolina drive was derailed by a Wilkins’ sack of Bentley, and a touchback put the Tigers in business at their own 20. Five plays and 80 yards later, the Tigers doubled the score on the Gamecocks. A 34-yard pass to Tee Higgins was followed by a 13-yard scoring run by Tavien Feaster and Clemson led 42-21 with 6:46 to play in the third quarter.

The Gamecocks once again put together a nice drive but were once again stopped on fourth down, this time at the Clemson two. With 98 yards to go, the Tigers put together another record scoring drive, covering 98 yards in 11 soul-sucking plays for the Gamecocks. The dagger was added on a 15-yard run by Choice, and Clemson led 49-21 with 12:06 to play in the game. The touchdown was the 41st rushing touchdown of the season for the Tigers, a program record.

South Carolina didn’t give up – aided by a terrible pass interference call, the Gamecocks got a 32-yard scoring pass from Bentley to Samuel and it was 49-28 with 9:10 to play, the most points scored against Clemson this season.

Clemson put together another nice drive, but a fumble led to another South Carolina touchdown, and with 3:37 to play in the game it was 49-35 Tigers. Clemson added an Etienne touchdown run with 39 seconds left on the clock to account for the final score.

Clemson plays in the ACC Championship Game next week against Pitt in Charlotte. The game will start at 8 pm.

Clemson vs. South Carolina Stats
Get the latest Clemson gear right here!
Comment on this story