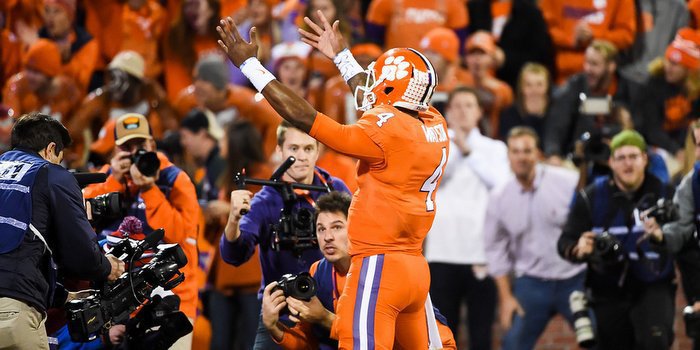 Watson has been stellar during the month of November

The Heisman Trust mission statement sounds like it was written with Deshaun Watson in mind.

The Heisman Trophy winner will be announced on December 10, 2016, at 8 PM in New York City, and Louisville quarterback Lamar Jackson is the only player that will get a certain invite.

However, Watson has played his way back into the conversation with an outstanding month of November, and a quick peek at the Heisman mission statement reads like a Watson commercial.

The Heisman Memorial Trophy annually recognizes the outstanding college football player whose performance best exhibits the pursuit of excellence with integrity. The winners of the trophy epitomize great ability combined with diligence, perseverance, and hard work. The Heisman Trophy Trust's mission is to ensure the continuation and integrity of this award.

Clemson head coach Dabo Swinney told the media Sunday that Watson would get his vote.

“What he has done here at Clemson is amazing. It's absolutely amazing. What he did last year, what he's done this year, you know, if you really just study some of the drives that he's put together this year, I mean, and not pay attention to the people that have taken shots at him because we had 12 drops in our first two games and four touchdowns and so what's wrong with this and that and not pay attention to the obvious but want to create something that's not there, and that's kind of what it's been all year when it comes to Deshaun.”

Watson has completed 305 of 452 passes this season for 3,626 yards and 34 touchdowns, but he’s done some of his best work in the last few weeks.

During the month of November, Watson has completed 114 of 151 passes (an astounding 75.5%) for 1,298 yards and 12 touchdowns and four interceptions. Jackson – the media darling who is considered the front-runner – has not fared as well.

The Cardinals were just outside the College Football Playoff’s top four when the month of November began, but Jackson hasn’t played anywhere near the level of Watson with a championship on the line. During the month, Jackson has completed 62 of 111 passes for 868 yards, eight touchdowns, and four interceptions.

In other words, Watson is at his best when his team needs him the most.

“This guy has been amazing. I mean, I go back to the Pitt game,” Swinney said. “I've never been around anything like that. Seventy passes and you complete 70 plus percent, 72 percent of your passes, incredible, and then follow it up these last two weeks and last night he's like 81 percent completion, against -- South Carolina was 17th in the country in pass defense coming into that game. Seventeenth in the country. You know, he goes out and completes 81 percent of his passes, six touchdowns, and should have had eight, and his ability to impact the game with his mind, his ability to impact the game with his legs, there's just nobody else out there. This guy is special.”

I asked Swinney if he had a message for the Heisman voters and he said yes.

“I know I'm biased and he's my guy, but he's all of those things, plus he is an unbelievable winner,” he said. “Bottom line, to me that's what it comes down to, and I'm just really, really proud of the season he's had, the leadership that he's provided, and I don't get a vote in all that stuff, but to me it's an easy decision.

“Other people have their reasons for what they think, but that's what I think. I've got a right to my opinion, too.”