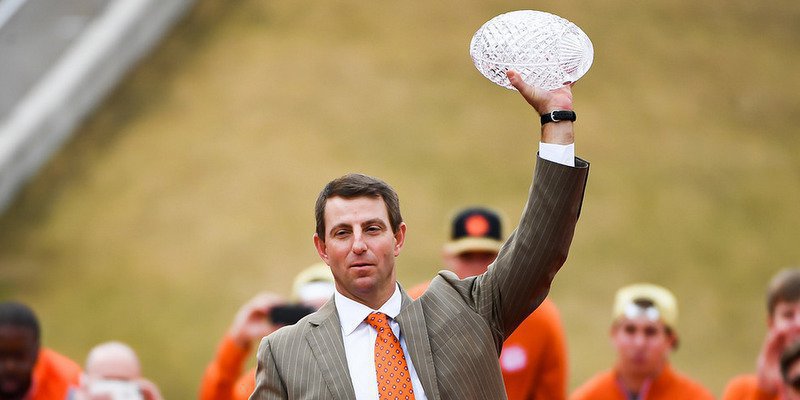 Swinney has accomplished a lot in his nine years

CLEMSON – On this date in 2008, wide receivers coach Dabo Swinney was back at home after a recruiting trip to North Carolina. As he played with his three sons, Swinney had no idea what the next few days would bring.

What happened next would change Clemson football and the life of William Christopher Swinney forever.

The Tigers entered the 2008 season ranked in the preseason top 10 and were led by a dynamic running back duo in C.J. Spiller and James Davis. The Tigers opened the season with a blowout loss to Alabama in the Georgia Dome, but won the next three games by a combined 126-26.

The Tigers lost 20-17 at Maryland in late September and went on the road to Wake Forest for a Thursday night matchup with the Demon Deacons on Oct. ninth. Wake Forest held on for a 12-7 win, and Bowden’s fate was sealed.

Bowden was fired after the 3-3 start, and Athletic Director Terry Don Phillips turned the program over a little-known wide receivers coach named Dabo Swinney, a man who had never been a coordinator or had any head coaching experience.

It was a move ridiculed by some national media at the time, and there have been a few rough patches along the way (the five-peat, 2010, the Orange Bowl loss to West Virginia).

The Tigers have fashioned back-to-back College Football Playoff appearances, won a national title and have more streaks than we’re able to list.

Friday is the ninth anniversary of Phillips handing the program over to Swinney, and Swinney told TigerNet Wednesday that he had no clue on that weekend in 2008 that his life was about to change.

“I was probably - like any other open Saturday - playing with my boys and watching college football,” Swinney said. “I’ve never really worried about stuff like that. I was disappointed with where we were. I was just focused on winning the next game because we had a lot of football left. Let’s go win that. Been there and done that before. My first year here we started out 5-4, so my focus was just trying to get our guys better and win the game. That would’ve been an open Saturday for us. We worked that Friday and then I went recruiting that Friday night. I went to see a receiver in North Carolina and then I was home with my family just enjoying a Saturday.”

Bowden was ousted that Monday, and Swinney got the call to Phillips’ office. In hindsight, he’s glad he didn’t know what was about to happen.

“We never know. I think God intended it to be just that way,” Swinney said. “We don’t know what’s down the road. We can prepare and put ourselves in the best possible position and have a vision for our future and a path, but we don’t know. We don’t know when our time is going to be called and God is going to call us home or whatever. I think he designed the world that way on purpose so that we wouldn’t be paralyzed by the fear of what’s coming. Just live today. Just have a great day today. Just take one moment at a time. That’s what I try to do.”