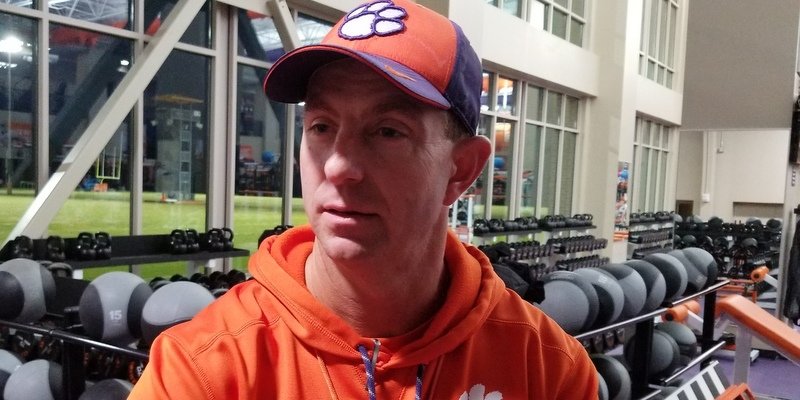 CLEMSON – No love for the Fonz, but Ron Burgundy got plenty of attention.

The end of practice was marked by the continuing competition at kicker, a competition that Alex Spence continues to lead.

“We’ve got a lot of kicking going on. It’s going to be down to the wire,” Swinney said. “(Alex) Spence has had a heck of a week. We’ve got a two horse (Christian Groomes and Drew Costa) race to see who gets the other seat on the bus, so we’ll make that decision tomorrow after practice. Spence has had a really good two weeks. He’s had a great week this week and done a really good job. I’m very encouraged. He’s definitely got a seat.”

The Tigers are in good shape health-wise heading into the game.

“Pretty much status quo from the other day,” Swinney said. “I don’t think Mark (Fields) is going to be able to go still. He’s still kind of feeling it, but other than that it should be all hands on deck.”

The initial College Football Playoff rankings were released Tuesday evening on ESPN, but Swinney didn’t care – he was out trick-or-treating with his kids.

“I was Dr. Monster. I didn’t have much time to get ready,” Swinney said. “I wanted to be the Fonz (Arthur Fonzarelli, or Fonzie from Happy Days fame) but nobody knows who the Fonz is. It’s a shame. I asked the whole team, and one guy raised his hand and said, ‘Isn’t that the guy that went Aaay?’ I asked him what show it was. Crickets. They don’t make TV like that anymore. Happy Days. Bonanza. We don’t have good shows like that anymore. Nothing.”

Swinney made the rounds without being recognized.

“I had a good mask and some crazy hair and I had a doctor’s cape, so it worked out great. I had some ghost hands,” he said. “I was Dr. Monster. It was fun and I had a chance to walk around a little bit and spend a little time with the boys. Drew - my son - had the costume of the night. He was Ron Burgundy. Polyester outfit and everything. We had some fun. It was good to see the older ones still having fun trick-or-treating. I had a little quick break to do that. I scored a huge Mr. Goodbar. It was fun. I kind of weirded a few people out. They had no clue who I was. I did see a Thad Turnipseed out though. It was unbelievable.”

The rankings show came and went, and the only way Swinney knew it was on? His wife Kathleen called him with the news.

“It really doesn’t matter. My wife was all excited about it,” Swinney said. “I literally forgot about it because I was in such a rush to finish up, get out and get back home. I had forgotten about it and Kath called me in the car and she was like, ‘I know you don’t care, but I’m so happy that we’re No. 4.’ So, I was a good husband for like 10 seconds. I was like Kath, ‘Let’s just hope we’re happy Sunday. If we’re happy Sunday, then great.’

“It really doesn’t matter. It’s conversation. It’s programming. It creates a lot of good conversation, which is good for college football. If this, then that and what then. I think that’s great. It creates great fandom and great conversation. It’s fun to think about stuff like that as a fan, but as a coach and as a player, you’re just killing brain cells because it just doesn’t matter. Last time I promised a pizza party, and the next thing I know I’ve got 60,000 people showing up for a piece of pizza. That’s when it matters for us because now you’ve earned it. All of this is just potential. Potentially, if we take care of business we could be in that conversation. We’ve got to go do it. Well done is better than well said. The good news is we get a chance to go do it. If we’re good enough, we will. If we’re not, you tip your hat and you reset your goals for the year.”