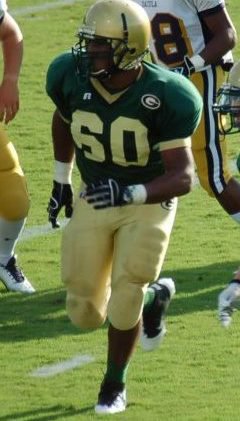 As the clock wound down in regulation in Clemson’s home basketball game against Pitt Saturday afternoon in Littlejohn Coliseum, Justin Young got the news that made the drive from Georgia worthwhile.

Young and his father, Andre were standing just outside one of the portals in Littlejohn talking to Clemson head coach Dabo Swinney

Tony Elliott
Assistant Coach / Running Backs
View Full Profile prior to their departure back to Loganville.

As former and current teammates crowded around, trying to listen in as the roar inside of Littlejohn increased, Swinney had a message for the big 3-star defensive end.

“Coach Swinney was just talking about the campus, the facilities and tradition at Clemson,” Young told TigerNet Saturday afternoon. “He was saying that everybody is All In, and that everybody there is like a family, and everything they do is like a family. He said he had looked at my tape, and he liked my hustle, and then he said, ‘I would like to offer you a scholarship.’ That was how I got the offer.”

The Clemson offer was number three for Young, who also has offers from Georgia and Marshall. Auburn is showing a lot of interest, and they’ve told Young they might offer after a visit to his school this spring.

Young, who stands in at 6-4, 260, was in Clemson for a little over a day, said the trip was exactly what he wanted, especially since he got to see former teammates and current Tigers Wayne Gallman, Ryan Carter and Nick Schuessler.

“Overall, it was a great experience,” he said. “Clemson has great academics, which really stands out to me. I know they also have strong support from their fans, who are always great. I like the coaches and the players.”

The trip to Clemson wasn’t an option until last week, when Elliott reached out.

“He just called me earlier in the week, and he said he wanted me to come for junior day,” Young said. “He said he liked my tape. We’ve actually really just met, so hopefully we can build a relationship.”

I asked Young who people say he reminds them of when he plays, and he made an obvious connection.

“People say that I look just like Robert Nkemdiche,” he said, talking about his former teammate who now plays for Ole Miss. “I think we play similar, and we are the same size.”

Young said he doesn’t have a list of favorites, and he has now been to junior days at Auburn, Georgia and Clemson.