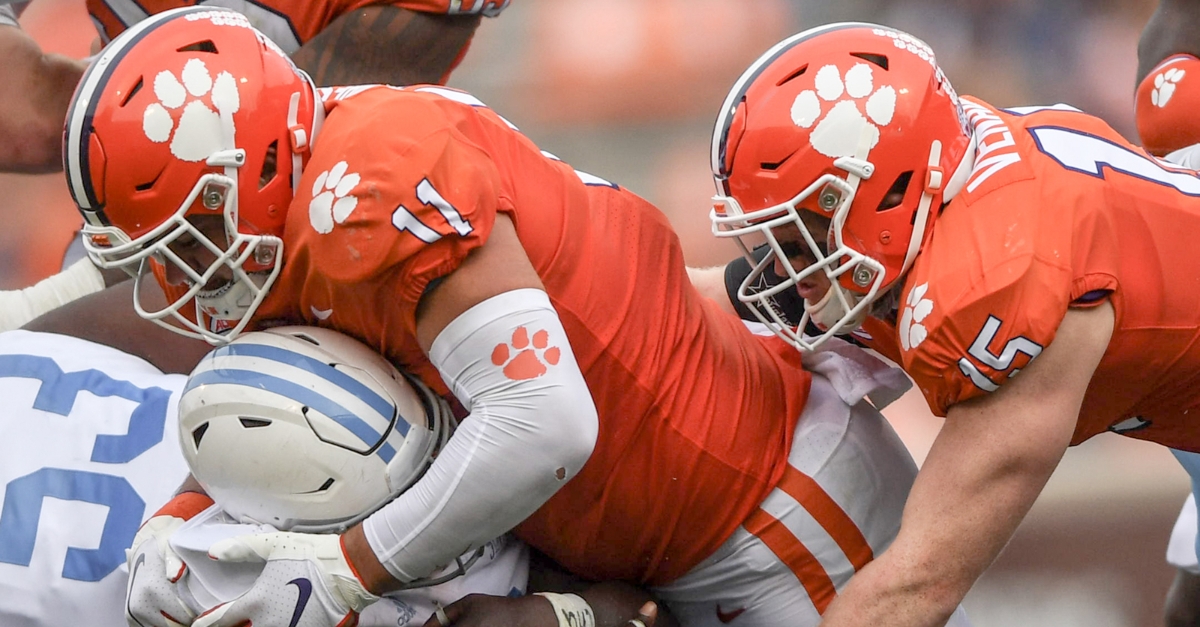 Bresee has been named PFF's True Freshman of the Week both weeks.

The grades for Clemson through the first two weeks of the season are in from Pro Football Focus, and it’s no surprise that quarterback Trevor Lawrence is drawing rave reviews. There are a few others, however, who are worth mentioning.

Pro Football Focus is a group of experts that analyzes every player and every play of every game to deliver player grades, stats, and rankings for the NFL, fantasy football, and NFL Draft. They are also a useful tool to delve in-depth into grades.

With Lawrence, PFF’s Seth Galina had this to say:

I have been telling anyone who still wants to listen to me that it would be nice if Trevor Lawrence worked the middle of the field in the intermediate level more. Yes, he is the easy choice to be taken by the New York Jets as the first overall pick in next year's draft, but it would still be nice to see him run some NFL level concepts. Clemson’s offense is meant to allow its outside athletes to make one-on-one plays and for its quarterbacks to throw with timing and accuracy to the outside. That’s fine. It’s how they win.I finally got my wish against The Citadel. Lawrence dropped back to pass only nine times before the game was all but over, and he went 8 for 9 on those plays; the lone incompletion was a wide-open Amari Rodgers drop that hit him directly in the hands. It was just a perfect day for Lawrence.

I know Clemson had one of the easiest opponents a team could have had, but the man-made NFL-level throws in his small sample of action against The Citadel would make me easily accept a year of losing to ensure he's my franchise quarterback. Lawrence attempted eight passes for the game and delivered a catchable ball on every single one. Three of those were deemed big-time throws. It'd be different if we hadn't seen this from him before, but it's become a normality.

With the departure of Tee Higgins and the season-ending injury to Justyn Ross, Clemson really needed some of their young receivers to step up in 2020. One of these young receivers was Frank Ladson Jr., a top-40 recruit in the 2018 class.

He saw very little action as a true freshman last year but caught a handful of nice jump balls with the help of his 6-foot-3 frame. Ladson still had quite a bit to prove, though, and his Week 1 was well short of expectations, as he dropped one of three targets.

He rebounded in a big way and showed exactly the type of weapon he can be for Lawrence once they face good ACC teams. Ladson caught three catches for 87 yards and two scores.

It’s no surprise that Lawrence is PFF’s top-rated quarterback so far. Capturing national offensive MVP honors in both games so far, his offensive grade is 95.3, an ‘A’ by PFF. His grade was 90.7 in 2018 and rose to 91.1 last year.

There are a few other notable offensive players:

McFadden has drawn the Tigers’ second-best offensive grade through two games. His overall grade if 89.3 and he's allowed just one quarterback hurry this season.

The freshman has played 57 snaps and allowed zero quarterback hits, hurries, or pressures.

We know what Etienne can do in the running game, and we expect to see more of him against Virginia. However, he has been one of the Tigers’ best receivers through two games and is averaging 14.5 yards per catch with 65 yards after the catch. If he continues to be a safety valve for Lawrence, this offense is almost unstoppable. Three of his four catches have gone for first downs, and more importantly, he has no drops.

The redshirt junior has started each game so far and shown why he’s emerged out of a talented Tigers interior D-line. Williams holds the best mark on PFF out of Clemson defenders to see action in both games this season (90.8 grade) with the leading grade in pass rush (90.1) -- tied for the team lead with four QB hurries -- and the third-best mark in rush defense (74.6) with three total stops. He ranked seventh last year on the Tigers in pass rush grade but 20th in overall grade.

Bresee has been PFF’s national freshman of the week in each game he’s played, ranking behind only Williams on the team in pass rush grade (84.2; min. 2 games) to go with a top-5 overall grade on the Tiger defense (83.3; min. 2 games) with four QB hurries, four stops, three tackles, a sack and a batted pass. Murphy has flashed as well early with the second-best overall defensive grade (90.5; min. 2 games) and a team-best 91.8 mark against the run with a team-best seven stops, two sacks and a forced fumble.

Here is what PFF said about Bresee:

Bresee was the PFF True Freshman of the Week in Week 2, and he claims it here again in Week 3. I have a feeling that this isn't the last time we will see Bresee claim this award in 2020. He logged 21 snaps for the game in Clemson's blowout win over The Citadel and made numerous big plays that led him to a PFF grade above 90.0. Only five of those were pass rushes, yet he still came away with three pressures while also tacking on a couple of run stops. Bresee logged a snap at nearly every alignment on the line, from heads-up nose to 6/7-technique, and he ate up the Bulldogs offensive line. He's going to be a special player for Clemson.