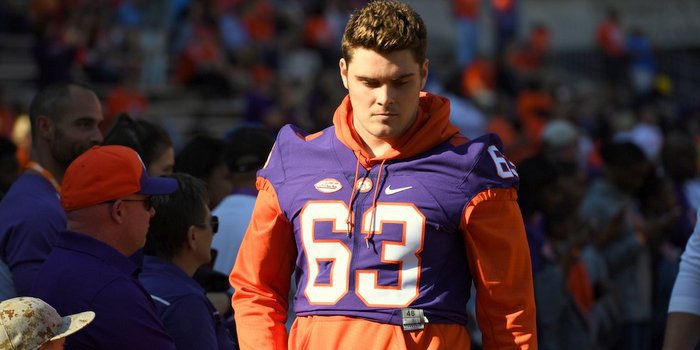 Fruhmorgen on the sidelines before Saturday's win over Syracuse

CLEMSON – There’s good news on the injury front, but one Tiger is dealing with a personal issue.

Second-ranked Clemson practiced for two hours Wednesday afternoon in preparation for Saturday’s 3:30 p.m. kickoff against Pitt, and head coach Dabo Swinney says quarterback Deshaun Watson and a few others of the Tigers’ walking wounded should be ready to go.

Watson injured his shoulder in the second quarter of last Saturday’s win over Syracuse but took the first-team reps Wednesday.

“Great. He looked great. He practiced every rep. He'll be ready to go,” Swinney said of Watson. “Everybody is back Ray-Ray looked good out there. Cornell (Powell) is still grinding his way back. Denzel (Johnson), he took his reps today. Cornell, he's trying to go. He's still not quite 100-percent, but he's much better. He practiced all of the reps today. He's still working his way back and getting stronger each day. He's doing rehab twice a day. He's just strengthening it. Same thing with Ray-Ray and Denzel.”

Right tackle Jake Fruhmorgen missed last week’s game with a sore shoulder, and Swinney said the sophomore from Tampa will miss this week’s game as well.

“Good news and bad news on Fruh. The good news is that he's improving on his shoulder,” Swinney said. “His shoulder is much better. There are no little issues, but he's got a personal issues with him and his family right now that he's dealing with. That's all I can say on that. His mom and dad are here. I will say this; he's never failed a drug test. He's not in any trouble, no team trouble. You can't have a more model player than Jake Fruhmorgen. He's as committed a guy as I've ever been around, as hardworking as I've ever been around, talented. He's the model of what you'd want as a player. It has nothing to do with anything that he's done or anything like that.

Fruhmorgen on the sidelines before Saturday's win over Syracuse "

“Sometimes you forget, he's a big, old good looking strong guy and is a very talented football player, but sometimes we all forget that they're still young people and young people from time to time have issues in their personal life come up that can kind of get them off center and rock their world. He's dealing with a personal issue that's between him and his family. We're going to try to help him as much as we can and love him through it. His shoulder is much better. I met with him today, but he wasn't out here (at practice) today. Just hope everybody will keep him in their thoughts and lifting him up in prayer. Hopefully, he can work through what he's dealing with. I'm thankful he's got a great mom and dad. He will not be with us this weekend, but hopefully he'll be back with us next week. It's out of my hands.”

“We'll go with Sean and Tremayne (Anchrum). They'll roll over there. If they don't get the job done, we'll go to another plan."

Is Gage Cervenka working at center?

“We bring them off the field. They x-ray them. They MRI them and assess what the situation is. He fell on it and bruised it. We just wanted to make sure he got it checked because he had a little stinger in there. He was fine. He could've come back last week but we had the game under control. He's worked hard. He's rehabbing. He doesn't have a lot of class so he's been rehabbing two or three times a day and strengthening it and getting ready to go. He's looked great. He was ripping it out there today. He's looked fine. We were cautious with him on Monday. We didn't do anything and then on Tuesday we put him in there and then today he did everything.”