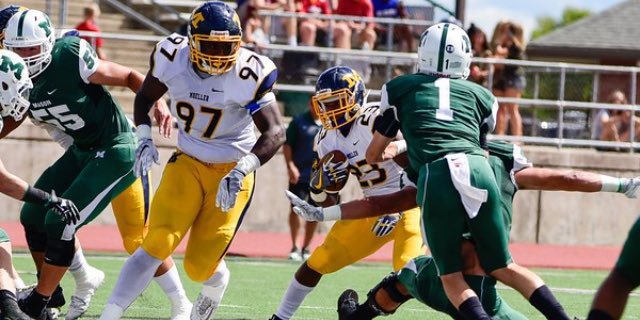 Hawkins (97) hopes to make it to Clemson next month

The godson of Clemson great Brentson Buckner recently picked up a Clemson offer, and a visit to Tiger town for the home game against Pitt could be in the works.

Aeneas Hawkins, out of Cincinnati (OH) Moeller, is one of the Buckeye state’s top prospects for the 2018 recruiting cycle and boasts an impressive offer sheet that includes Ohio St., Florida St., Notre Dame, Penn St., Pitt and Tennessee.

“I know that Coach (Marion) Hobby has been interested in me for a while,” Hawkins told TigerNet. “He got the number of my high school coach, and he called my coach at the school and that's when he sent him the offer.”

Hawkins said Clemson has been on his radar for a while.

“Really, I've known about Clemson for a while because of their football program, but I didn't really start watching them until they tried to recruit my buddy, Brendan Bates, the tight end, he's my best friend,” Hawkins said. “They started recruiting him, so I started paying more attention to them - really in the past two months or so. Right around that time, they started showing an interest in me, too.

“I mean that's DLU, they send so many defensive linemen out of there. They have that one kid - he's a true freshman playing - and he's doing great. Their defensive line down there is always dominant, and that's the first thing I'm looking at - how their defensive line plays and how their coaches coach. From that aspect of it, Clemson is second to nobody in college football.”

Hawkins (97) hopes to make it to Clemson next month"

He also knows about the Tigers because of Buckner, who played at Clemson and in the NFL and is now a defensive line coach for the Arizona Cardinals.

“Brentson played for the Carolina Panthers while my dad was there. My dad was a corner and Brentson was still playing d-line,” Hawkins said. “A few years later, he and my dad were still buddies, my dad was doing an internship with the Steelers and while he was doing the internship they shared a dorm. I came up for two weeks during Steelers training camp and stayed there, and that's when we got really close. At that point, we started forming a relationship. He's the one that saw my sophomore film from last year and started getting it out to some coaches. Once that happened, that's when the offers started rolling in. So, Brentson has been my guy since day one. He was the first person I told about my Clemson offer. Before I even tweeted it, I let him know.”

Hawkins said he is looking at making it down for the November home game against Pitt, a school he has ties to. Hawkins’ grandfather - Artrell Hawkins, Sr. - played at Pitt in the late 1970’s.

“I’ve also been to a bunch of games there,” he said. “LaRod Stephens-Howling is a close family friend, and he played there. My uncle, Wayne Jones from Bishop McCort, he’s my dad’s half-brother, and he played at Pitt for a couple of years. My quarterback, Thomas MacVittie, he’s going there this year. So that would be a good game to come see.”