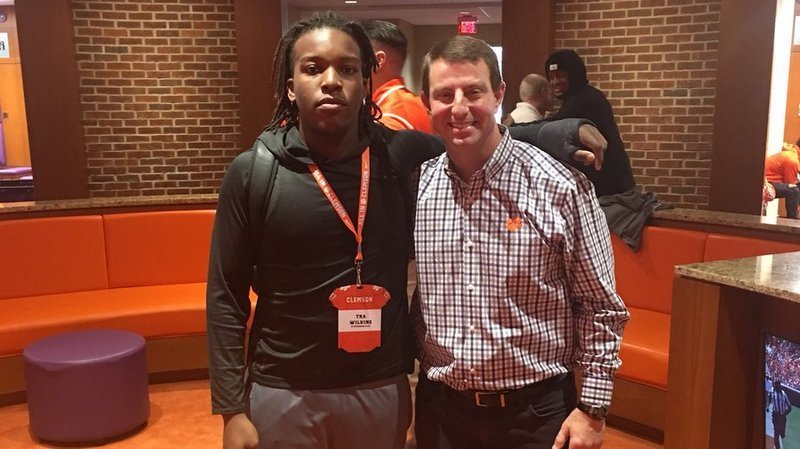 Tra Wilkins has offers from most of the major players in the SEC and Big 10 but after a trip to Clemson last weekend, there’s one offer he’s waiting to reel in.

Dabo Swinney is expected to stop by Stone Mountain (GA) Stephenson – home of the 6-2, 210-pound linebacker – and Wilkins hopes Clemson’s head coach brings the good news of the offer.

“Clemson, they're different than other schools. They select kids,” Wilkins told TigerNet earlier this week. “They don't do things like other schools. They take the process seriously when they pick a star. It's one of the reasons I've got Clemson at the top.”

“They haven't offered me yet, but they talked about. Dabo Swinney is supposed to come to my school and offer,” Wilkins said. “Coach Elliott was here earlier this morning. If they offer, I'm going to let them know that they're in my top list schools.”

When visiting Clemson, most people will focus on the facilities or the family atmosphere, but it was the university’s academic profile that really caught Wilkins’ attention.

“It went well. Me and mom enjoyed ourselves. We enjoyed it,” he said. “When Dabo went over the academics, it just showed the tradition of Clemson. I learned more stuff about Clemson that I didn't know. Coach Dabo really talked about how their players graduate with degrees. That really stands out to me and mom.”

After spending time with Venables, Wilkins realized that much like Clemson, he’s just different.

“He wants me to play inside linebacker. He's cool,” he said. “He keeps everything real. They are all some real coaches. He showed me how different he is from other coaches.”

National Signing Day is a year away for 2019 prospects but Wilkins said he hopes to make a decision before his senior year.

"I’ll be back to Clemson. Hopefully, I can come back up for one of their early spring practices,” he said. “I want to make a decision before my senior season and maybe talk to my guidance counselor about graduating early.”