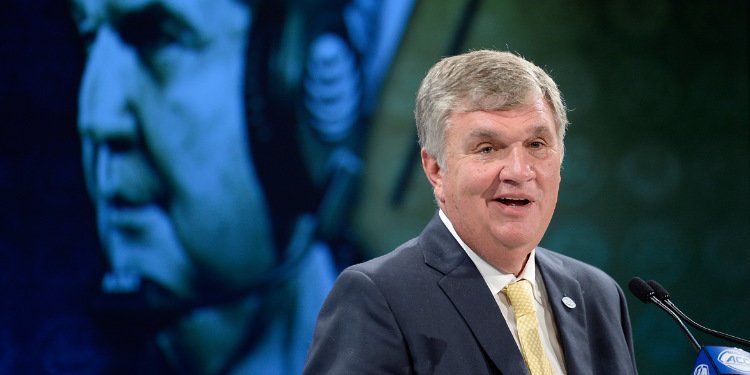 Johnson speaks with the media Wednesday at the ACC Kickoff (Photo by Sara Davis, USAT)

CHARLOTTE, NC – Georgia Tech head coach Paul Johnson hasn’t been shy about the disparity between schools in the college football arms race, and he admitted Wednesday that the Yellow Jackets can’t win an arms race against Clemson.

Johnson spoke to the media at the ACC Kickoff in Charlotte and mentioned that winning football games still comes down to blocking and tackling.

“I think that on our level of football, sometimes it's turned into a little bit of an arms race, and there's a lot of different factors that go into it,” Johnson said. “But the bottom line, I think, to win football games hasn't changed that much; you need to be able to run the ball and win the turnover battle and play good defense. And if you'll do that, be sound in the kicking game, you've got a chance to win games. It hasn't changed much.”

TigerNet asked Johnson about the difference between Clemson and Georgia Tech – and if he feels it is a level playing field – and he said that Tech won’t win an arms race with the Tigers.

“Well, it certainly doesn't hurt them. I'm not sure that just that one aspect changes anything, but I think that just the overall commitment to the program, not just with facilities, but with budgets, with personnel, with all those kind of things,” Johnson said.

“You know, every school is different. Georgia Tech and Clemson are set up differently as far as the schools go. We have far less students. Our fan base is probably not as big. We're not going to have as many people at the game. So we're not going to win an arms race with Clemson. But what we've got to do is sell what we have that's positive.”

That doesn’t mean the Yellow Jackets can’t beat the Tigers.

“And if I look, they're our natural rival from the other side. I think we're 5-6 against Clemson. We'd like to be better. So certainly it's not impossible for us to win,” he said. “I think the last time they came to Atlanta, they were ranked in the top five, and I think we did win (that was in 2014; in 2016 Clemson defeated Tech 26-7). But you know, I think that what Dan (Radakovich) and Dabo (Swinney) have done at Clemson is remarkable. They've been really consistent, and the commitment that they have to their football program is certainly visible. You can see that, not only with facilities but with personnel, with whatever you would need.”

Johnson said Georgia Tech has other positives to offer recruits.

“But I don't think that everybody has to try to do that to compete,” he said. “Everybody has to be positive with what they have. We've got a great school academically. We're in a great city. We have a lot of positives that we can sell rather than facilities sometimes.

“But you want -- certainly it's not going to hurt you to have those kind of facilities, that's for sure.”