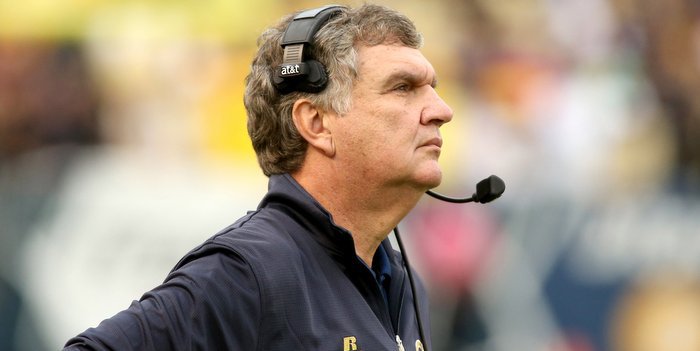 Paul Johnson knows that Death Vslley will be loud Saturday

Georgia Tech head coach Paul Johnson knows that playing Clemson is tough no matter the day or time, but playing in Death Valley at night makes for a tough task. Especially when the fans are wound up.

Georgia Tech (4-2 overall and 3-1 in the ACC) travels to take on 7th-ranked Clemson (6-1, 4-1) Saturday night in an 8 p.m. kickoff. The home team has been dominant in the series in recent years - the home team has won seven of the last eight games in the series with the only road win taking place last year when Clemson won 26-7 in Atlanta.

Johnson’s team lost to a Top 15 Miami team two weeks ago and held on to defeat Wake Forest last Saturday, but Johnson knows the schedule gets a little tougher this week.

“The competition is going to ratchet up each week and certainly this week playing the defending national champion, a team that’s loaded with really good athletes on both offense and defense,” Johnson said. “So it’ll be a big challenge.”

Clemson has won the last two games by a combined score of 69-31.

“Obviously we have to play better,” Johnson said. “They’re good and we’ve played like garbage. Certainly, we’ve got to play better, but they’ve been pretty good the last two years.”

He then said that he knows Clemson fans will be loud and wound up.

“It’s a good home-field advantage. They pack 80,000 in there and they’re loud,” Johnson said. “Virginia Tech is also hard to play at night games too. There’s a couple. There’s no question that going in there Saturday night on national TV, they’re going to be wound up.”

“They’ve got really good players, but they have had since we’ve been here. I can’t remember a year that they didn’t have a really good and big defensive line, from the time I arrived here,” Johnson said. “Now, they’ve probably got more of them. When I first came, there might have only been four or five, now there are eight. It’s like they roll them, keep them fresh and they’ve got a lot of erasers on defense. They can get lined up wrong and not fit right, somebody beats a block and comes to the rescue. They’ve got guys that can do that.”

He also likes what he sees out of the Tigers’ running backs, especially Tavien Feaster and Travis Etienne.

“They’re good players. They’re not as experienced as [Wayne] Gallman who played forever, but they’re both really fast. They’re home run guys,” Johnson said. “If you give them a crease they can go the distance. Certainly, they’re going to be great players in their own right. They’re already pretty good.

“I think they lost a lot of experience offensively. They lost not only a great quarterback but a great re3-receiver. I remember talking to [Clemson head coach] Dabo [Swinney] before the game last year and he thought that No. 7 [Mike Williams] was the best receiver they’ve ever had at Clemson and that says a lot, they’ve had some good ones. Of course, he was a first-round draft pick too, I think. They’ve got good skill; they’ve got some new guys. They don’t have as much experience on offense as they had a year ago but they’re still playing very well.”