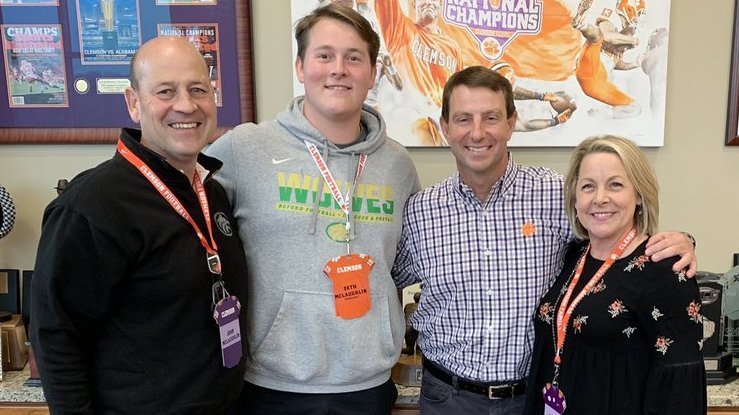 McLaughlin poses inside Death Valley on his visit

Is Seth McLaughlin an oversign possibility for the Tigers?

McLaughlin is a 3-star 2020 center out of Buford (GA) who has visited Clemson, Alabama, and Oklahoma this spring and is going back to Alabama this weekend. He also plans to visit Oklahoma again in April.

McLaughlin and his parents spent time at Clemson weekend before last for the junior day. At that point, the Tigers had room for two more offensive linemen in the 2020 class. Those two spots were filled by Mitchell Mayes and Bryn Tucker. Where does that leave McLaughlin and Clemson?

"They had two spots available, and they told me if I committed right there then I would be guaranteed to have one of those two spots," McLaughlin said. "Two kids committed the week right after I left. I really liked it. I wasn't ready to commit that weekend, but I felt like I could definitely see myself there. Coach (Robbie) Caldwell said that they may end up taking six. There is still a chance for Clemson, but I haven't followed up with Coach Caldwell since Bryn Tucker committed."

McLaughlin said he still hears regularly from Caldwell and that contact still has him thinking about Clemson.

"I still think in my mind that I want to commit by the start of spring football, so I need to have a conversation with coach Caldwell to see if that's my option," McLaughlin said. "If they are really serious about me, they'll make room for a sixth lineman spot. Right now they have 14 offensive linemen, and most schools have 16 or 17. They only took three offensive linemen last year, I'm pretty sure, two or three. If they are really serious about me, I think they'll save the sixth spot for me, but we haven't had that conversation yet." 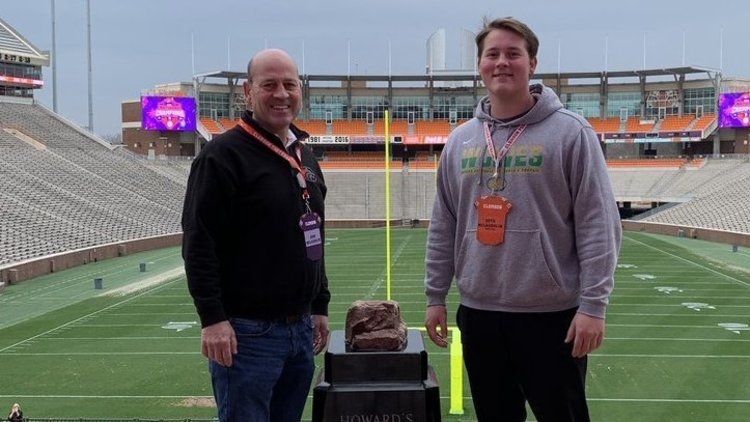 McLaughlin poses inside Death Valley on his visit "

If and when they have that conversation, McLaughlin said he'd have to give Clemson serious thought.

"That would still be an option for me," he said. "I walked away from the visit, I was like, yeah, this is definitely a school I could see myself at and liking. But I also felt that way about both the schools I visited this spring. I wasn't ready to commit that weekend. I had to pray on it, and by the time I prayed on it, two commits had already come in."

McLaughlin obviously has great options, and he knows he can't really go wrong with any of the schools. But that's not making the decision any easier.

"That's what makes it hard," McLaughlin said. "I almost guarantee that each of those three schools is going to be in the national championship game by the time I graduate college. The three sets of coaches, they are all great men, great leaders, really successful. All three really want me bad. It's definitely a lot to put on a 17-year old's shoulders."