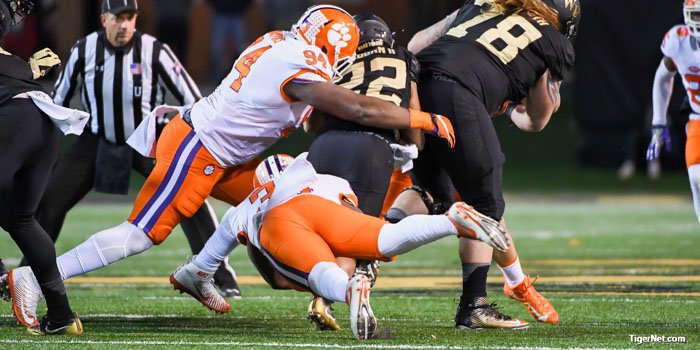 Venables tries to get an official's attention Saturday night

WINSTON-SALEM, NC – Brent Venables admits he gets a little too excited at times.

Clemson’s defensive coordinator met with the media outside of Clemson’s locker room following the Tigers’ 35-13 victory at Wake Forest, sporting a gash on his nose and fielding questions from reporters about a dizzy spell he suffered on the sidelines early in the game.

It’s all a day in the life for Venables, who admitted the gash on his nose came from head-butting Christian Wilkins’ facemask and that the dizzy spell he had was because he got a little too wound up trying to get an offensive pass interference call from an official.

"Just trying to work out that pass interference call. Everything was fine,” Venables said. “Just get a little excited every once in a while."

"You always want a few plays back, but our guys had a great week. Tonight, we really liked, for the most part, the discipline and position and the tackling was pretty good,” Venables said. “Wake Forest, traditionally, makes it hard on everybody. They played with confidence the last seven, eight, nine weeks. They did a nice job as far as coaching and putting guys in positions to be successful. It's a very patient offense, they try to exploit your aggressiveness and sometimes you have to match the patience. We got in a good rhythm early, and our guys up front played really well.

“I thought the secondary was in terrific position, and we had a few breakdowns during the first half and the drive there in the second half, but other than that we kind of settled in. Really pleased with what was at stake, and again, it's a long season and to play at a really high-level week in and week out is not easy to do. The preparation and the grind of it is not easy, but really proud of all our coaches and all our players with the way they had themselves ready to play. Coach Swinney was talking about how well we come out and play our road games." 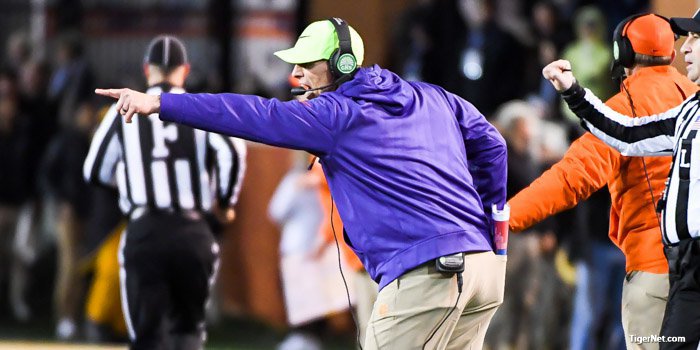 Venables tries to get an official's attention Saturday night "

He said the defense had the kind of week of preparation he likes to see.

"I thought they were great. I thought they had a great week of practice and preparation, and we did, too, a week ago,” Venables said. “Sometimes the other team can do some good stuff, and you don't play as well, or you don't execute quite as well. They recognized what was in front of them and I loved the maturity and attitude. It's not easy to stay locked in and focused, but our guys did. I think they've got a lot in front of them that they aspire to attain."

Linebacker Ben Boulware said he thought the defense was too relaxed prior to the Pitt game, but Venables didn’t see it that way.

"I didn't really see that. There's a fine line, though, too,” he said. “I don't know; I did not feel that way. We did a lot of little things early in that game poorly. I thought guys were a little bit too much and not playing with the simplicity and discipline needed against a good team that was playing very well on offense. We didn't execute very well against them. That being said, super proud of the way our guys came out tonight and executed."