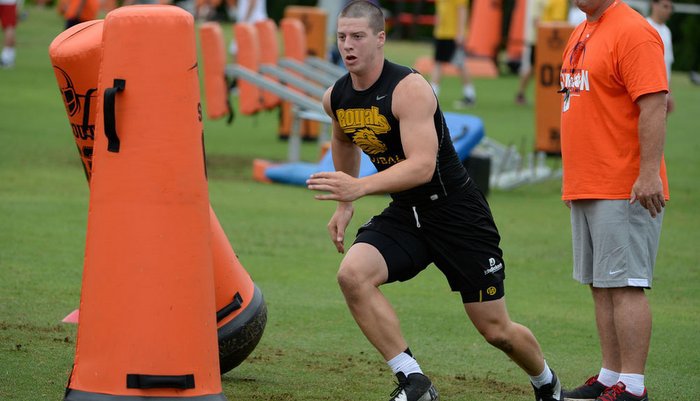 View Full Profile elected to finish the spring semester of his senior year before enrolling at Clemson, but he has taken advantage of different opportunities to see just how he will spend his time as student athlete once he arrives on campus in June.

The Orlando (FL) First Academy tight end took in Clemson's Russell Athletic Bowl practice last month and then took his official visit to Clemson over the weekend to essentially wrap up the recruiting process with just over two weeks remaining before National Signing Day.

The four-star prospect told TigerNet Monday evening that watching practice gave him a glimpse of the practice habits and processes he will see when he starts summer workouts and fall camp in just a few short months.

"That was really cool. It was five minutes from my house and literally about a mile down the road from me to go see Clemson play," Williams told TigerNet. "I couldn't talk to the coaches or anything because it's off campus but it was really cool to be able to see them practice and also the result of the practice and the game was incredible."

Although he wasn't able to attend Clemson's win over Oklahoma in the bowl game because of his participation in the Under Armour All-American Game, Williams said that he enjoyed seeing what the future holds for Clemson's offense with Jeff Scott

"I never had any concerns about Coach Scott or Coach Elliott," Williams said. "They are both extremely qualified for their positions. I know they're going to do some special things and take the offense to the next level. It was cool to see what that next level might be with what they did in the bowl game."

The penultimate step in the recruiting process is the official visit - a visit that gave Williams a glimpse at the every day life of a Division I football player.

"I hung out with Milan Richard. I got to hang out with the coaches and cover a lot of stuff," Williams said. "I really enjoyed everything about it. I saw that his playbook is really thick and he said that it's really tough to learn it. I know that I'm going to have to come in there and really devote myself to learning the playbook and do the things that I have to do in order to play at the next level. That was informative. He said that coaches are the same way when you get there as they were during recruiting. He loves it. I can't wait to get up there and join them."

Williams was also able to spend time with his recruiter of record and family friend.

"I probably talked to Coach Scott the most," he said. "We've gotten really close through the recruiting process because he's been my recruiter and he has connections to my family. I've gotten to spend a lot of time with him over the years. It's really cool to just be able to sit down and hang out with him all weekend. I really enjoyed spending time with him."