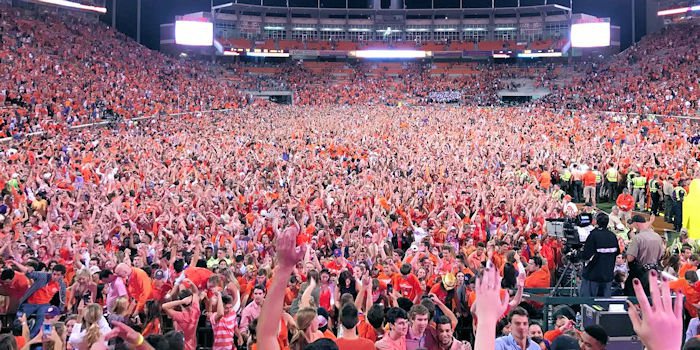 Clemson's crowd should be out in full force for Auburn

The passing of each day brings us a little closer to the start of football season, and when the ACC and ESPN released more start times for the 2017 football season Wednesday it made September seem not so distant.

Sure, we have entire summer to endure, but today is the first day of June and head coach Dabo Swinney’s camps start next week. Then we’ll have the Elite 11 and The Opening and barely a fortnight will pass before we have the ACC Football Kickoff and Swinney’s media golf outing.

The schedule that was released Wednesday is, at first glance, very favorable for Clemson.

We already knew that the season opener against Kent St. will start at noon. One thing is certain – it will be hot, emergency services will have an overload of heat-related calls and I plan on starting a cold water concession at the stadium.

Then the Tigers get their first real test of the season the next week in a 7 p.m. start against Auburn. Clemson hopefully will have found an answer at quarterback, and we’ll really get an idea of just how good Clemson’s defense can be because Auburn brings in a new quarterback and Baylor transfer Jarrett Stidham.

Clemson has opened as a 7-point favorite in the game by South Point Casino.

“I think Auburn's going to be really good, but of course Clemson, I think you have to give them a lot of respect for winning the championship last year, being in the championship game two years ago," South Point book director Chris Andrews said on My Guys in the Desert with Brent Musberger on VSiN.com and SiriusXM on Monday. "I'm high on Auburn, but there's still some question marks involved. You have a new quarterback coming in and I think a little pressure on Gus Malzahn. I think Clemson was a deserving seven-point favorite."

This will be a big early-season test for both teams, and the late start almost ensures a sell-out crowd and tremendous game atmosphere. The Clemson crowd should be out in full force, providing a lot of emotion for the Tiger defense (much like what happened last season at Auburn with Auburn’s defense). Hopefully, the Clemson coaches don’t pull a Gus Malzahn and rotate four or five quarterbacks.

Following the game against Auburn, the Tigers take to the road for the first time against Louisville. Each one of the three contests in the series has been close – Clemson won 23-17 in 2014, 20-17 in 2015 at Louisville and 42-36 last season in a game that has turned into an instant classic.

Louisville opens the season with a neutral-site game against Purdue (Lucas Oil Stadium) and then travels to UNC for an early-season ACC clash in week two. The game against Clemson will be the Cardinals’ home opener and will kick off at 3:30 p.m.

It's interesting to note that this will be Clemson's first road day game since they won at South Carolina in November of 2015 - all of last season's road games were at night.

The afternoon start works out well for Clemson. Louisville has Lamar Jackson, who wasn’t the ACC’s best player last season (that honor belonged to Deshaun Watson), but he was one of the most exciting players. The Cardinals will have revenge on their minds, and a sold-out nighttime crowd would be a tough road opener for whoever is playing quarterback for Clemson.

As it stands right now, I don’t think Louisville is as good as Auburn. The Cardinals have Jackson, but teams learned late last season that making him stand in the pocket and throw leads to errors. He’s dangerous as a runner (as Clemson found out), and keeping Jackson in the pocket is easier said than done. But his offensive line might not be any better, he lost some key receivers and the defense lost some key pieces. However, expect another close one in the land of pizza.

The other game time that was announced was for Clemson’s Friday the 13th (October) game at Syracuse in the Carrier Dome. Friday games are disappointing for whoever has to play them – the road team has to prepare on a short week, and Clemson plays at the Orange just six days after a home game against Wake Forest.

The Tigers played a Friday night game at Boston College last season, and it was disappointing from a fan turnout perspective. Syracuse might have more fans than the Eagles, but don’t expect any kind of electric atmosphere.