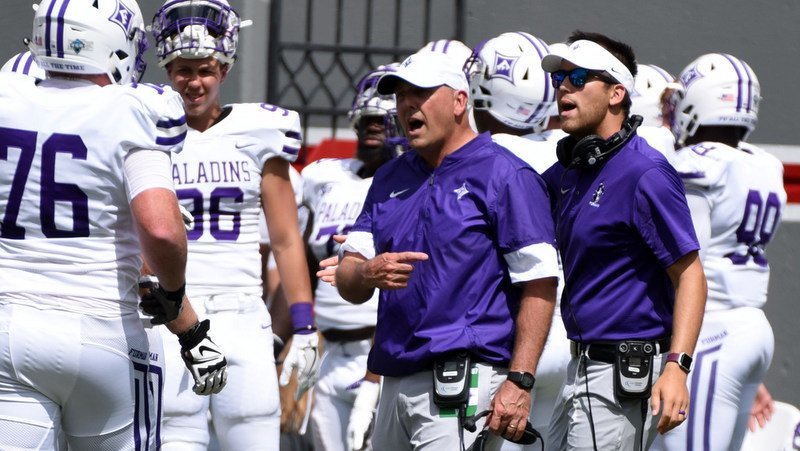 Hendrix and the Paladins play at Clemson Saturday (Photo by Rob Kinnan, USAT)

Furman head coach Clay Hendrix wishes his school was getting paid more for Saturday’s trip to Clemson’s Death Valley. After all, he expects to the Paladins to be more competitive than Kent St. was in last season’s opener.

The Tigers opened last season with a 56-3 victory over Kent St. in 2017, but the Golden Flashes walked into Death Valley with a singular purpose – collect their $800,000 check and leave. Kent St. didn’t attempt a pass until the third quarter and attempted just five all game, preferring to slam into Clemson’s defensive front three times a series and punt.

Furman, which will get a $360,000 check from Clemson, doesn’t buy into that mentality.

“I think that's a team that has a loser's mentality. We're out here and we want to win a conference championship and get in the playoffs and have a chance to win a national championship,” Furman head coach Clay Hendrix told TigerNet this week. “This game probably doesn't have a ton of bearing on that one way or the other. We want to go play well. I was mad a while back at what they were paying us because of what we agreed to a few years ago. I saw what they paid Kent St., and I made the comment, 'I bet you we're going to throw more than two passes.’

“For us to have any kind of success we have to hit a few throws. Do you try to be smart about some things you ask your kids to do? Absolutely. We plan to go play well and if we do, we'll be just fine. We think we have a really good scheme, but at the end of the day, you still have to go block and tackle. That's certainly not our mindset. To win the game, we've got to score points.”

Hendrix knows the Paladins will have to play an almost perfect game if they want a chance to win.

“We've prepared like we have any other game. I told the guys that I think we've done everything we need to do up to this point to go play a football game and to put us in a position to go play well,” Hendrix said. “I think we're certainly a better football team than we were this time a year ago. Going into the year, I certainly feel better about our football team. Now, to go play that group, I just think you control what you can control and that's how we play. We can't beat ourselves. We can't have mental mistakes and negative plays. That's stuff we somewhat have control over. When you're blocking one of those guys, it's still one guy. He's a little bigger and faster than we've been blocking in August, but you've just got to do your job a little bit better than you would normally do it.”

“The thing is just the size and the speed. We played an N.C. State group last year who I thought was really good up front on defense,” Hendrix said. “I didn't think they were great in the secondary. I felt like if we had a chance, we could take advantage. You're always looking for weaknesses and I just don't see a weakness. They're big, athletic, experienced, they've been used to winning and they're really well coached. That's both sides of the ball. You just don't see anything that it's like, 'Gah, we maybe can exploit this.' We run some option, but for us, it's anything we can do to slow them down a little bit and then try to make them be assignment sound. I'm sure those guys up front would love nothing more than to get in a three-point stance, pin their ears back and come after the quarterback, but we just can't get into that kind of game.”

The Tigers and Paladins have a lot in common, but Hendrix is more focused on the unique challenge facing the Paladins this weekend.

“For so much we have in common, we have a lot of differences too. They have some huge advantages over us. Robbie Caldwell was my coach,” Hendrix said. “I was a grad assistant under him. I coached Mike Dooley. I was a coach when Jordan (Sorrells) was playing here. Joey Batson was the first ever strength coach we had when I was here in the early 90s. (Aamir) Trapp is here. It's been fun for our kids and our kids are excited to go play. I think our fans are excited to go over there. You don't get many opportunities like this. We have a unique opportunity and we just want to go play well and not have any regrets when we look back on it.”