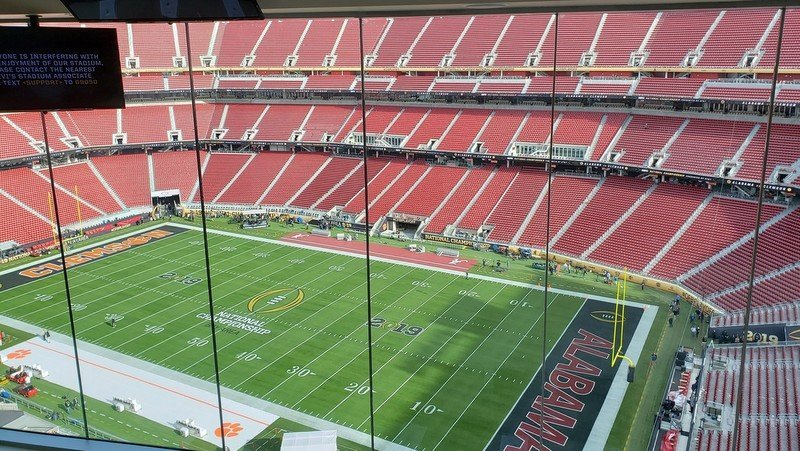 The view from the press box at Levi's Stadium

Since we’ve been back home a lot of people have reached out to ask about the game site, about how the locals reacted to the influx of college football fans, and the stadium itself. That includes the media we ran into, and there are more than a few stories to tell.

I’ll start with the media. Unlike past years when the national media didn’t give Clemson a chance to win the game, I found that many media members we talked to actually picked Clemson to win. The closer we got to the game, however, I found that many people began to change their tune and the “It’s Alabama” reason popped up. When a program has won as many big games as Alabama it’s hard to get past the thought they will lose a big game.

I was part of a radio show with an Alabama beat writer, and he said that he felt like the two teams were even talent-wise and that if they played 10 times each team would win five of them. He also said he picked Clemson to win for his newspaper but also admitted that everyone else on their staff picked Alabama and he didn’t want it to be all Alabama so he was different and picked the Tigers. Hey, gotta get those bragging rights somehow.

I spoke at length with just one of the local media people – he covered the Warriors – and he couldn’t wrap his head around the fact that Clemson University is actually in a town called Clemson. It took me a solid two minutes to explain to him. (Where is Clemson located? In Clemson? I get that, but what city or town?) I let him go on the Abbott and Costello routine for a few minutes before letting him off the hook. However, he finally turned and looked at me and said, “What state is it in?” I answered, deadpan, that it was in Georgia and he smiled and said that’s what he thought.

He also admitted – after I came clean and told him that Clemson was in South Carolina - that the phenomenon of college football was new to him. The Pac-12 Championship Game held in the same stadium doesn’t draw many fans, and people out there are more in tune with their professional teams than college teams.

The fact that several thousand people traveled across the country with $2 bills blew him away.

As for the locals, we ran into several who admitted they knew a game was going on and they invariably said they hoped Clemson beat Alabama. However, most of the natives were unaware there was a game or where it was being played. Many wondered whether the stadium would be half-full and which team would have the most fans.

I ran into Clemson fan Wyatt Cash outside the stadium, and he had purchased endzone seats (the ones that are recliners) with unlimited food for a greatly reduced price (he was thrilled with those seats), and when I was on the field for pregame I walked over to his seats to take a picture. The guy he bought the tickets from is a ticket broker of sorts, and he told us that he felt like Clemson would have a 60-40 advantage based off the tickets he had seen, and it turned out he was right. (Thanks for the red vines, Wyatt).

As for the game being held in that part of the country – we were told that Pac-12 Commissioner Larry Scott was the driving force for it, which makes sense. The crowd turned out to be fantastic (I heard that a lot of Clemson fans who had tickets but couldn’t make it gave them to local charities, and many military members were able to attend because of that generosity.

Back to the locals – we were in the tunnel waiting for the Clemson team bus to arrive, and a 49ers employee was standing there listening in on our conversations. He finally had enough of our chalk talk and said, “I don’t care who wins and I don’t even know who is playing. All I care is that I am getting paid double-time to stand here.” He was the lone exception, however, as most of the Levi’s Stadium and 49ers employees we ran into were more than accommodating.

The press box facilities were extremely nice, the food was fantastic, and the media amenities (postgame interview areas, elevators, etc.) were as nice as you will find anywhere.

As we flew home, I realized the entire trip (from the stadium to the location to the people) was far better than I could have hoped for. Do I want to go back for a game? No, I will take something closer any day of the week, and many media members who covered the Cotton Bowl suggested the playoff committee would do well to name Dallas as a permanent spot for the championship. That will never happen (money talks), but it would be a central location with easy-access airports and plenty of hotels.

The only downside (besides the gas prices) was the weather. TigerNet’s own Brandon Rink used to live out there, and he said January was the start of the monsoon season in that part of the country. We battled raindrops every day except for game day, which was a blessing.