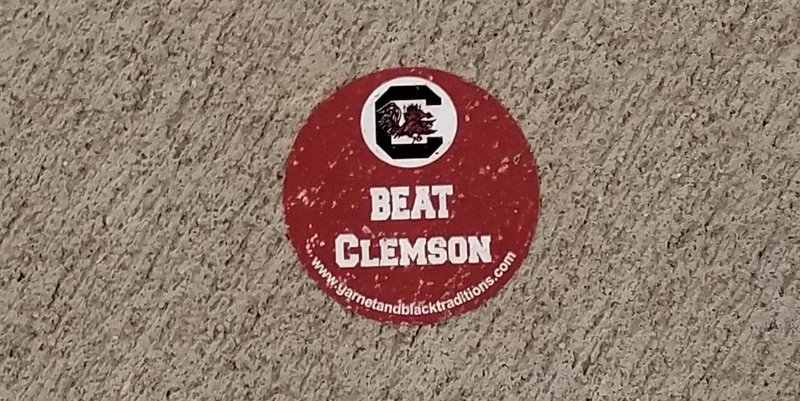 This sticker was stuck to the sidewalk outside the stadium

Early Sunday morning, around 1:30 a.m., TigerNet’s tired group of five exited the Williams-Brice Stadium press box and made the long trek back to our vehicles, camera bags and laptop bags in tow. As we reached the back side of the stadium, one lonely “Beat Clemson” sticker was stuck to the sidewalk, it’s shine trampled off by thousands of feet.

Much like the fan base at South Carolina, the sticker had seen better and brighter days.

We walked the sidelines before the game, hoping for that “big-game” feel. For most of pregame, there was very little buzz and very little energy. People ask me all the time if the Tigers are “fired up” or ready to play. My answer is always the same – no. This team doesn’t get too emotional, and a trip to Columbia was simply another business trip. You travel, you spend the night somewhere, you bus to the opponent’s stadium, warm up and then beat the brakes off of them.

The buzz finally arrived during Victory Walk. For those that don’t know, head coach Dabo Swinney brought Victory Walk to Clemson after he took over in 2008. It’s not taunting. It’s not new. It’s not meant to be derogatory toward anyone. However, I knew that the Tigers would be marching towards the South Carolina student section, so I told Nikki to video the Tigers. She asked what I would be doing, and I told her I was going to be paying attention to the students.

Several items had already been thrown, the birds and curses were already flying and I knew what was going to happen. It was easy to see. And for those apologists that think it was “just a few” who responded only after “being taunted by Clemson locking arms” I have news for you: The students – over 90 percent of them – lifted double birds as the walk started. Male, female, it didn’t matter. Look at the video. Look at the pictures. It happened just as I thought it would, and the video has over half a million views.

This sticker was stuck to the sidewalk outside the stadium"

A bottle came flying out of the stands – you can hear it hit me in the knee and my camera follows it for a split second – and then I resumed shooting video. Finally, there was a buzz. The buzz disappeared early, and the next video I shot was of those same students leaving en masse in the third quarter.

The final score of Clemson’s 34-10 demolition of South Carolina didn’t tell the entire story. Once the Tigers’ Ryan Carter sailed into the end zone with his interception off Gamecock quarterback Jake Bentley, the game ceased to be much of a contest.

What followed was a two-hour instructional video on how to make the other team give up. While we were packing up in the press box, a group of writers discussed the evening’s proceedings and we all – Clemson beat writers, South Carolina beat writers and national guys – agreed that Saturday’s performance was more dominating than last season’s 56-7 rout.

Last season was a simple mismatch, NFL players taking players fresh out of high school to the proverbial woodshed. This year was supposed to be different – the Gamecocks had claimed eight wins, the defense was better and all of the players were a year older. The narrative was that Clemson lost all of those great players to the NFL and this was South Carolina’s chance to earn a win.

Instead, Clemson took a team with just six seniors into Williams-Brice and took the best that South Carolina could throw at them, literally and figuratively. Dodging water bottles and liquor bottles and towels folded over mini-bottles to create a dangerous projectile, the Tigers forced the Gamecocks to fold. Clemson avoided the fights and the cheap shots and all the debris from the stands and laughed.

Co-offensive coordinator Jeff Scott stood in the tunnel outside of the visitors’ locker room and said what has become clear – Clemson is used to the big game, and they take everybody’s best shot. It’s normal for the Tigers to go on the road into a hostile environment at night. And win.

The defensive players hinted that Bentley was seeing ghosts after the first interception. All I know is this, in 19 games as a college quarterback, Bentley has had a quarterback rating under 102.1 only twice. You guessed it, both of those games are against Clemson. In 2016, Bentley was 7-17 for 41 yards and an interception for a QBR of 49.68. He was a little better Saturday, going 16-29 for 126 yards, one touchdown and two interceptions for a QBR of 89.26.

The talent gap between the two programs is vast, and if the recruiting rankings are to be believed that won’t change any time soon.

As we made the final trek to the car and passed by the discarded abuse sticker, I thought back to the the Gamecocks’ five-game winning streak in the series. For a while there, it felt like Clemson would never win again, but Swinney kept telling us that rivalries turn. With that in mind, I made sure to remind myself to enjoy each and every second of Clemson’s current run of success.

Why? Because that sticker was worn with pride earlier in the day, but in a matter of hours was discarded and trampled. Enjoy the moment while it lasts.