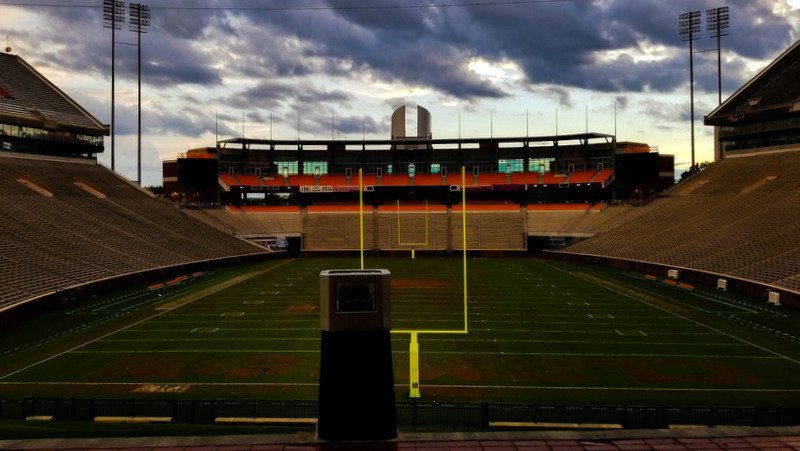 Death Valley is quiet now, but the season starts in two months

Clemson’s football team will take to the practice fields behind the new operations facility in less than a month with the hope of another appearance in the College Football Playoff. Clemson fans, players, and coaches are excited and with good reason. What do those on the outside think? I learned a little bit more about that this past weekend in Frisco.

As the only Clemson writer at the event, I was on my own for the first day. There are a few other writers I know but most of my colleagues that I see throughout the season don’t fall into the recruiting category. I am one of a kind, a novelty – a senior writer who not only covers the team on a daily basis but also covers recruiting.

During the long periods of standing around waiting for interviews or waiting for players or just waiting (my job requires a LOT of waiting, especially for head coach Dabo Swinney to end a practice) gave me the opportunity to get to know some other folks from across the country and to deal with writers I don’t normally deal with.

I met writers from national publications and people who covered schools like Oregon, Southern Cal, Ohio St., Oklahoma, Michigan, Penn St., and others. It’s always fun to hear about other schools, talk about coaches that are easy or difficult to deal with (Dabo and his staff are easy, trust me. I couldn’t handle the likes of Jim Harbaugh) and season outlooks.

Once I got past the whole “still wish we had Brent Venables” talk from the Oklahoma writers, it was fun to hear what they and others had to say about the Clemson football program, to see what those who aren’t necessarily in this part of the country have to say about the Tigers.

One Sooner guy told me that the Oklahoma coaches were wishing for a matchup against Clemson in the playoff, rather than Georgia because the Sooners didn’t feel like the Clemson offense could outscore Baker Mayfield and the Oklahoma offense. We know Clemson’s defense was good, so that would have been a fun matchup to watch. If Kyler Murray is as good as some people think, part three of the Tigers and Sooners might happen this season, even though I am tired of seeing Oklahoma. Anybody but Oklahoma, Ohio St., or Alabama, please. Those storylines are old. However, I’ll take one of those teams if it means another trip to the playoff.

One recruiting writer that I spoke with mentioned that Clemson has always been strong in North Carolina, Florida, and Georgia, but with the emergence of Kirby Smart and the recruiting machine in Athens, the Tigers are looking nationwide to find talent. He’s right – Clemson has signed guys from Alabama, Missouri, Connecticut, Kansas, and other states over the last few years.

The Tigers also have established a recruiting presence in California – linebacker Spencer Lytle is down to Clemson and Wisconsin, linebacker Justin Flowe is high on Clemson, and the top-rated quarterback for 2020 is looking heavily at Oregon and Clemson. The Tigers also have a commitment this cycle from a defensive lineman out of Michigan and several other states are in play, including Maryland, Pennsylvania, Louisiana, and Alabama.

However, when it came down to the conversations about the upcoming season, there were two things that were always mentioned – who will be the starting quarterback (and how good is Trevor Lawrence?) and the defensive line.

Clemson’s quarterback situation will be front-and-center for all of fall camp and the start of the season. All interested parties will look on to see what happens initially and who will be starting at the end of the season. I don’t know who that is, and I can’t even venture a guess right now.

As much as people wanted to talk about the quarterbacks, however, they smiled when it comes to talking about Clemson’s defensive line. One Ohio St. guy grudgingly admitted that while many thought the Buckeyes’ line was as good as Clemson’s last season, he didn’t think so. He then said, “We might look back on this as the greatest defensive line in college football history.”

Almost everyone said they think Clemson will make the playoff, one Texas writer (with a big grin) said Clemson should beat Texas A&M by 15 or more, and the guy from Southern Cal said Clemson is the one team he would love to see the Trojans play.

The Clemson brand continues to grow, the recruiting footprint continues to widen, and the view from afar is almost the same as it is up close. Almost.