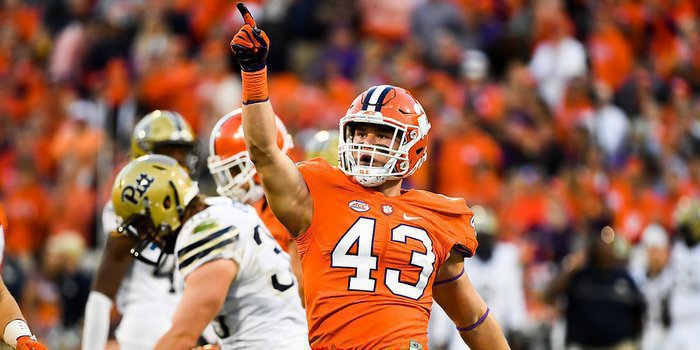 CLEMSON – Several hundred high school coaches and Michigan St. head coach Mark Dantonio were on hand to watch Clemson’s practice Friday afternoon, and they all got to watch a punting show for the ages.

The Clemson coaching staff hosted their annual Coaches Clinc on Friday, and Dantonio (who attended the University of South Carolina) was the keynote speaker. On the field, the practice ended with a punting competition that featured left guard Taylor Hearn, wide receiver Hunter Renfrow and linebacker Jamie Skalski.

We spoke with several players after practice ended, and they all agreed that Skalski won the day by booming a touchback that was easily the longest punt of the day, drawing cheers from everyone in attendance. Skalski contributed on special teams last season, and can be Clemson’s kickoff specialist if needed.

*Corner K’Von Wallace told me he loves playing boundary corner, and after the season was over he was approached about a position change (after playing mostly nickel and safety last season). He told the coaches he wanted to play boundary, and as a result he’s competing for the starting spot there this spring.

His favorite part of playing that position?

“I get to talk to the receivers,” he said. “Diondre Overton and Deon Cain and I talk all the time. Today I was matched up against Deon a lot, and after plays he will ask me, ‘How did you know this? Why did you play it that way?’ It helps me get better.

Wallace said he loves being on an “island” and while his island doesn’t have a name, it’s coming.

*The offensive coaching staff has praised tight end Milan Richard throughout the spring for his play on the field, but Richard told TigerNet he's improved the most in his understanding of the game.

However, the redshirt junior said he is far from being where he wants to be.

*Tight end D.J. Greenlee has drawn rave reviews from the coaches this spring, and he laughed about how it’s something he’s been waiting for.

“I’ve been here for over a minute, and I’ve learned from (Jordan Leggett),” Greenlee said. “I’ve been contributing on special teams and watching everything that’s been going on. Now it’s my time to step up.”

Greenlee’s dad – Larry Greenlee – is on the strength and conditioning staff, and D.J. said celebrating a national championship with his family is something he will never forget.

“I actually saw my mom and my little sister first, and my momma about broke my neck,” he said. “My daddy got there and jumped on me. We had talked about it all the time, and I told him I wanted to win a national championship with him. Words can’t explain it and that is something I will cherish forever.”

“It happened in the National Championship Game,” Fields said after Friday’s practice. “It was early in the first quarter. At my position, it hurts moving laterally. Once I get that taken care of I can start doing other things. Just take my treatment and do what (trainer) Danny Poole says. I don’t want to be the guy sitting out with a yellow jersey, but it is what it is and I will do what I have to do to get back.”

*Chad Smith has been in the Clemson program for two years and will finally get his opportunity to showcase his talent at middle linebacker (MIKE) after sitting behind older, more experienced players.

"Pretty comfortable. I've spent most of my time here at MIKE," Smith told TigerNet Friday. "I've played a little bit of WILL and then during the season at SAM and in certain packages, I've been SAM-defensive end hybrid. I'm pretty comfortable at MIKE."

While two of the three linebackers off of Clemson's national championship team return, there's a huge leadership void left by the departure of Ben Boulware, but Smith said each member of the linebacker corps has taken it upon themselves to fill that void.

"Ben leaves a big hole to fill in regards to leadership, but we've come together as a unit to fill that role," Smith said. "Guys like Kendall (Joseph), Dorian (O'Daniel) are taking the lead, but as a unit, we're coming together to fill that role. Each one of us believes that we're a leader, regardless if you're a freshman, redshirt, whatever, you're a linebacker. Coach V (Brent Venables) stresses that the linebacker has to be the leader on the defense, so we pride ourselves as individuals to be leaders when we're out there on the field."