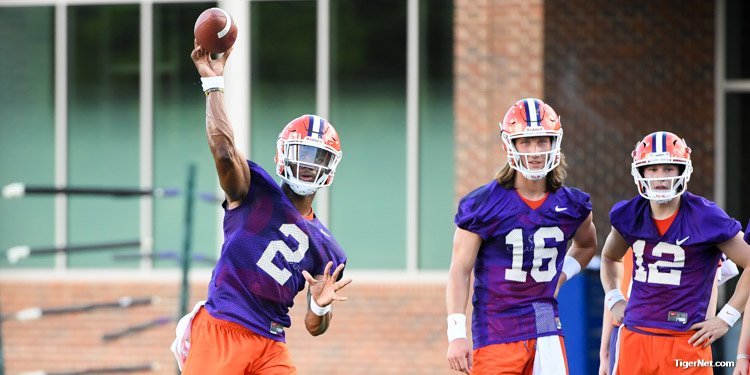 The quarterbacks run through a drill early in Friday's practice

The weather didn’t seem like Christmas Friday afternoon in Clemson – the rain stayed away but the ever-present muggy feeling didn’t – but the opening of fall camp is one of the best days of the year. Clemson head coach Dabo Swinney told the media that he was excited to get things going.

"Today's been kind of like waking up and it's been Christmas all day today," Swinney said. "I'm just excited to get started. I love our team. Love the spirit they've come to camp with and the focus."

Following the practice, co-offensive coordinator Tony Elliott and a few players met with the media, and here are a few takeaways from that session.

Elliott said he was pleased with what he saw.

“It was good to get out on the grass,” Elliott said. “I am excited and we have a good group. They know what it takes. There is a different intensity when the coaches get out there, but I was pleased with what I saw.”

Elliott was asked if he saw anything different out of Trevor Lawrence.

“It was really the same thing I saw out of him in the spring,” Elliott said. “But all four of the quarterbacks had some good throws today. They have been working the base offense all summer without the coaches. I am excited to get on the film. That is what I love about our practice field – you can get exposed and Brent (Venables) had those guys moving around.”

He said that running back Lyn-J Dixon got some second-team reps.

“He validated what I saw out of the recruiting process,” Elliott said. “He reminds me a lot of Andre Ellington. He is also a lot like Travis (Etienne) when he first got here – he doesn’t yet know where we want him to run but he can see the whole field and if he sees green grass he can go to it.”

Elliott said Etienne has a different confidence this time around and it starts in the weight room.

“Before, he would go down to the other end of the weight room, but now he wants to lift with the big boys,” Elliott said. “It’s hard to go stand next to Adam Choice, who is a 220-pound fifth-year guy who can throw a lot of weight up there, but he has that confidence now and that starts in the weight room.”

Elliott said he saw a hunger and determination from the team.

“They came back for a reason,” he said. “They didn’t come back just to go through the motions. They came back to prove something on the field.”

Linebacker Kendall Joseph said the team was all about business Friday night.

“We remember last year, but we are excited about this year,” Joseph said. “We put the work in throughout the summer. We weren’t sitting around moping, we just attacked it and it was one of the best summers I’ve been a part of.”

Many of the players had a hashtag of CUinSanFran on their social media signoff (this team wants to head to San Francisco and Santa Clara for the National Championship), and Joseph said he didn’t mind.

Defensive tackle Albert Huggins said the team is more than the front four on the defensive line.

“We are all a family. Clemson goes out every year and tries to introduce good guys into the program” Huggins said. “We have six or seven d-tackles and 10 defensive ends. We have a lot of guys that can play.”

Huggins then said he had a message for the talented freshmen.

“He is a freak man,” Huggins said of Thomas. “I haven’t seen anyone get off the ball like that in a long time. Xavier is a quiet guy. He has opened up a little more and having fun with us. That is what you need to get through camp and get through the season. He has grown by communicating.”

Wide receiver Hunter Renfrow was asked about the quarterbacks.

“They were both incredible. Nothing has changed. They both can sling it,” Renfrow said of Kelly Bryant and Trevor Lawrence. “We are excited to get the freshmen out here and get things going.”

Renfrow said he was also impressed with freshman Justyn Ross.

“Justyn is a really good player,” he said. “He is a lot like Tee (Higgins) as far as ball skills. He was the number one player in Alabama for a reason and you can see that out on the field.”