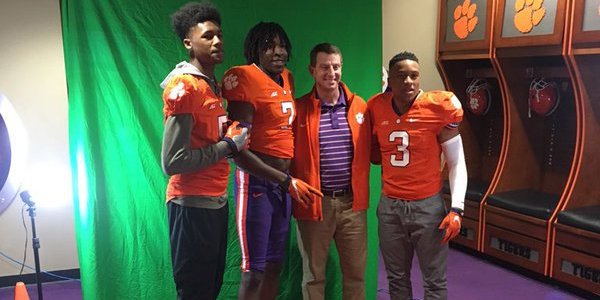 Clemson head coach Dabo Swinney isn’t interested in Friday Night Lights or having something like Dawg Night. That’s great for the football factories that churn and burn through recruits and players, but he’ll stick with the All In Cookout.

The trend in college football recruiting is moving toward schools hosting one marquee event during the summer. Schools invite as many big-time prospects as possible in the hopes of showing off the stadium and campus under the bright lights of a summer night, hoping to cash in on the emotion of a charged and competitive atmosphere.

Last summer, then-Georgia head coach Mark Richt estimated that between 700 and 800 recruits attended the Bulldogs’ premier recruiting event, working out under the lights of Sanford Stadium.

At Clemson, however, things are different.

Head coach Dabo Swinney debuted the All In Cookout shortly after taking over as head coach, and at the Cookout recruits don’t have to worry about competing for another star, for an offer or worry about interviews and recruiting sites. The Cookout also doesn't bring in hundreds of players - it's designed to bring in a select group of prospects.

The prospects can bring their families, sit by Lake Hartwell for a cookout and get to know Clemson’s coaches and players better. It’s the Clemson way.

“My first couple of years here, people were pressing me to have some combine type of thing, and I just didn't want to do that,” Swinney told TigerNet. “I didn't want to take away from our camp, number one, and we came up with the Cookout. At that point, we know the guys a lot more, and it's just an opportunity to hang out and visit and just have some fun. We get the recruiting stuff out of the way, and it's just a relaxed atmosphere.”

Swinney was asked why he wouldn’t want to show off Death Valley under the lights, and he said it’s something that is done at other times.

Would Clemson ever transition from the Cookout to more of a combine-type of event? Never say never, but don’t count on it.

“I just think everybody has to think what is best for them. Everybody has to decide what's best for them,” Swinney said. “But the decision I made five years ago when we looked at some different things was that I didn't want to do anything to take away from the camp. The cookout just brings everybody together, and it's what we do. You never say never. You are always evaluating and things like that. But I like where we are right now and what we do.”