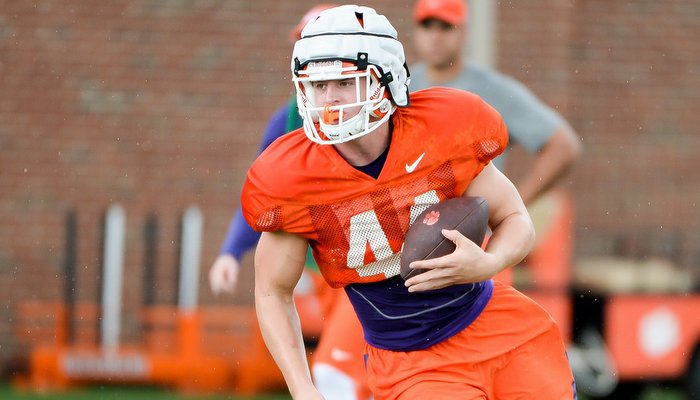 Garrett Williams has shown tenacity in blocking early in camp

CLEMSON – Clemson’s highly-touted freshmen are getting a long look during the early days of fall camp, and it comes as no surprise to offensive coordinator Jeff Scott

The Tigers practiced for two hours Friday morning at Jervey Meadows, and Scott said following the practice McCloud has been a standout so far at receiver.

“I am really pleased. Ray-Ray is one of those rare freshmen that come in, and the game is slow for them,” Scott said. “Usually they come in, and the game is really fast and it takes them a little while. He is one of those guys that the game is really slow. He feels like he is still out there in high school playing, and he looks very natural out there. I like his attention to detail and being able to pick up on the offense. If he keeps progressing, he is a guy that will have a chance to play early.”

“Deon is showing flashes. I think the position that Deon is in is a little more difficult because you've got all of the install that is kind of hitting you and then you've got the boundary and you have Mackensie Alexander

Cordrea Tankersley
Jr. Defensive Back
#25 6-1, 195
Beech Island, SC
View Full Profile right there in your face,” he said. “So you don't have a lot of time to think. I've seen enough out of him to know he has a chance to be really special, but I want to see some progress from him in the next scrimmage.”

Scott said that while he doesn’t think of McCloud as a surprise, he has been pleased with the progress the Tampa native has shown.

“It's hard to surprise us because we are watching every detail each day and you kind of know. I would say Ray-Ray McCloud, and I know that would surprise some people because he already had a lot of expectations,” Scott said. “He has shown some things you don't typically see out of a freshman. His mental mindset is that the stage isn't too big. That has probably been a pleasant surprise. He's a little bit further ahead than I expected. With him being a wildcat quarterback and running back in high school, I thought he would have to develop his hands a little bit more. But he's further along maybe more than we expected.”

McCloud even excels in the blocking game.

“As far as downfield blocking, Ray-Ray put on a clinic in our W drill today,” Scott said. “He really got after some guys and won all four of his reps. I think Deon is still trying to figure out who's hitting him and where it's coming from. But Ray-Ray has a little lower center of gravity and he can get down underneath guys and drive. I've been pleased with him.”

Williams has also been a standout.

“A guy that has really shown up is Garrett Williams,” Scott said. “He is a guy that's kind of gained everybody's attention in special teams and short-yardage situations. He's really hunting guys out and knocking them back, and we're going to continue to look at him and see if that's a role he can have for us this year. The next ten days will probably help say a lot. I would say if you ask Coach Pearman, he would say that Garrett Williams has been the guy that has kind of shown out in that group. Coach Swinney has shown he's not afraid to play a freshman, and he's not afraid to play the best guys.”

Along the offensive line, Scott said he is seeing the freshmen show some fight after a tough first week.

“I know Coach (Robbie) Caldwell has been really pleased with what he's seen so far,” Scott said. “A freshman offensive lineman is not like a wide receiver that just goes out there and makes a bunch of plays on day one and you know without a doubt. Those guys have to get ran over a few times - and I think we had that happen last week - but then we've seen some rebounding and I thought in the scrimmage they did some good things. Today I saw some of those young guys knocking some guys back.”