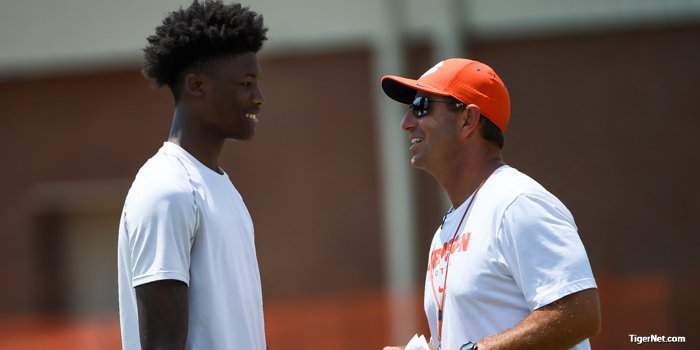 July 4th is a time for family, cookouts, and fireworks, and one of the nation’s top players started off Independence Day with an orange and purple pyrotechnic show.

In the video, the logos of the finalists appear in different places at a family cookout, but the video ends with an orange and purple fireworks show, and the camera pans back to reveal a flaming Tiger paw in the water and Higgins’ family wearing Clemson apparel and saying, “We’re All In.”

Higgins is the No. 31 overall player, and No. 5 ranked receiver according to ESPN, and is ranked No. 40 nationally by Rivals.com but in the conversation to be a 5-star.

He is the 11th commit of Clemson’s stellar 2017 class (and the highest-ranked behind 5-star quarterback Hunter Johnson), and he said he knew a week ago that he wanted to be a Tiger and put the video together with Bleacher Report. 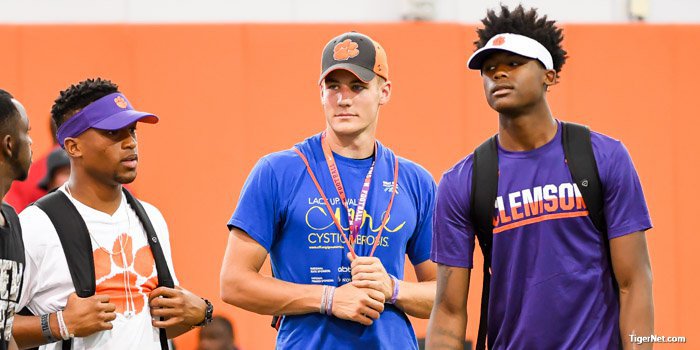 Higgins is the latest commitment to come out of the Volunteer State as the Tigers and Vols battle for that state’s top prospects. Higgins committed to Tennessee last August but withdrew his commitment after attending Clemson’s elite junior day in late January. Clemson owns commitments from two 2017 4-stars from the state – Knoxville (TN) Catholic receiver Amari Rodgers and Memphis (TN) Trezevant running back Cordarrian Richardson – as well as newly acquired 2018 linebacker Mike Jones Jr.

“It's great to be with those guys. Being with Amari and Hunter has a little bit to do with it, but a lot of it has to do with the coaches and stuff like that,” Higgins said. “Our relationship (with Jeff Scott) is off the charts. We're super close. It's really good. He was great during the whole recruiting process, and I can’t wait to play for him.”

“I told Coach Scott last night, and Coach Dabo found out today,” Higgins said. “Coach Scott, was like, 'Oh, yeah!' I called Coach Dabo this morning and said, 'Coach, I'm coming to Clemson.' He was just really excited. You could tell he was pumped up on the phone.”

Next up for Higgins is Nike’s The Opening in Beaverton, Oregon, in a few weeks, and he said he and Johnson and Rodgers would be recruiting the nation’s top prospects to Clemson.

“My relationship with Amari is very close. Amari is like a brother to me,” Higgins said. “I didn't let him know until I released the video. Now it's time for me to start recruiting with those guys. I'm going to recruit like I've never recruited before. I’m going out there and recruit for Clemson.”

Clemson and Tennessee have also been in a heated social media battle over who gets to claim “Wide Receiver U” as their slogan, but Higgins said he doesn’t pay attention to all of that. He is going to Clemson to win championships.

“I don't really pay any attention to that rivalry or the Wide Receiver U thing. Clemson is my future school,” he said. “We're going to win some championships. It's great to be a Tiger. We're definitely going to win championships.”

July 4th is another GREAT DAY TO BE A TIGER!!! #WE2DEEP17 pic.twitter.com/gDjChDno40

Words can't explain how excited I am right now.. Congrats to you bro! Can't wait to ball out with you?? @teehiggins5 pic.twitter.com/NVlCkEbprv