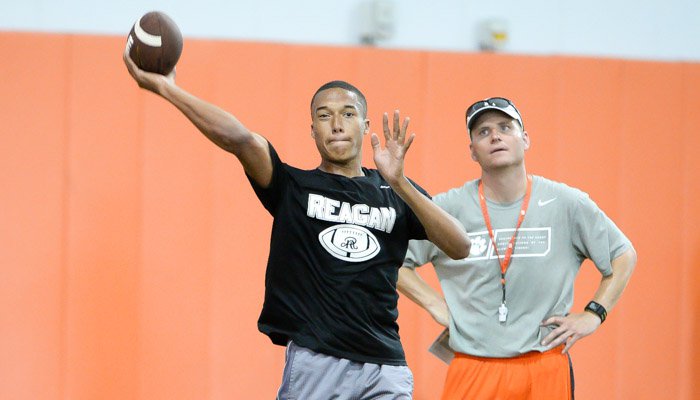 Mission accomplished for the 2017 Reagan quarterback.

The 6-3, 194-pound dual-threat quarterback participated in the second session of Dabo Swinney

Mond told TigerNet that he first learned of the offer from Swinney during one of Saturday’s workout periods.

“Coach Swinney talked to me during our drill time on Saturday and is the one who told me that they were going to offer me,” Mond told TigerNet Monday. “He just told me that, 'there's no doubt that we're going to offer you.' Then it was my turn to do drill work and he just said that he wanted to talk to me and my dad before we left the next day and that's when he made the offer. The offer wasn't official until Sunday, because he wanted to tell my dad also. He brought me and my dad onto the field and just told us that I received an offer.”

The 4-star prospect said that he has paid attention to the Tigers over the years, but he was surprised by all of the talent on hand at Swinney’s camp.

“I thought the camp went really well. There was probably more talent at the receiver position than I have ever thrown to,” Mond said. “Two guys who are committed [ Cornell Powell

Diondre Overton
Wide Receiver
6-5, 195
Greensboro, NC
View Full Profile , uncommitted] there and one guy who is from Florida [ James Robinson

James Robinson
Wide Receiver
6-3, 190
Lakeland, FL
View Full Profile ] who is in my class, they were all really good to meet. The campus, whenever they're done with all of the construction, I think it's going to look amazing.”

After the weekend stay, Mond said he finds Clemson and the opportunity to play for the Tigers “intriguing.”

“I know the success that Deshaun Watson had, even though he didn't play as much, but I know he's going to have a great year this year,” he said. “The offense is really intriguing. I know that even though Coach (Chad) Morris has left, the offense is still going to be very effective in what they do and whatever schemes they run. There's just something intriguing that now that I've been to the Clemson campus, the people are just amazing there and that's why I really fell in love.”

While he was able to see everything that Clemson has to offer by touring the campus and seeing the facilities, Mond said he hopes to make it back to Clemson to see the lore of Death Valley in person.

“Our high school bye week for the season is November 7th, so we looked at the dates and that's the week Clemson plays Florida State, so I hope I have the chance to come out because that should be electric,” he said.

However, he said Clemson is and will remain at the top of his list.