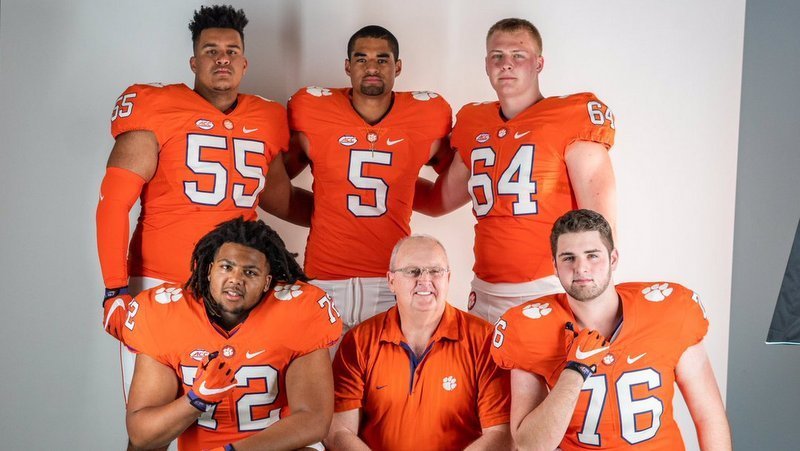 Mitchell Mayes made the trip to Clemson last weekend and got a glimpse into his future and the future of Clemson football.

Mayes, the 4-star offensive line commit out of Raleigh (NC) Leesville Road, took in last Saturday’s Orange and White Game in Death Valley. The visit allowed Mayes to reconnect with his fellow offensive line commits, spend a little time with a few uncommitted prospects, and check out the spring game.

The 60,000 fans in attendance impressed Mayes.

“It was a glimpse into my future. We were going into the stadium, and I couldn’t believe it,” Mayes said. “You see all of those fans for a scrimmage. Clemson has the best fans in college football, and I honestly can’t wait to play there.”

Part of the day was spent bonding with Clemson quarterback DJ Uiagalelei. The offensive line took pictures with the California prospect, then had a little fun “protecting” Uiagalelei from a throng of Clemson fans that wanted an autograph.

“I saw him over there, and I just saw DJ, and I just wanted to go over there and keep recruiting him, keep talking to him. That’s my bro regardless of if I don’t recruit him,” Mayes said. “Then, everything started blowing, ‘D.J., come get an autograph. Will you come sign this?’ I just started messing with him and asking him, ‘D.J., will you sign my forehead?’ I was just trying to lighten the mood, and then it just got bigger and bigger. It was a fun time watching him be him.

“It was a great time. He just understood how important he would be for our offense and for our overall team. We want to have a good time blocking for him and have as much fun as possible and convince him to come here.”

Another key to the weekend was the time spent with his fellow offensive line commits.

“We want to build a great bond,” Mayes said. “The most important thing about an offensive line is building a relationship, so you know that they’re going to be down with you when it gets tough in the game, so we’re just building that relationship now and getting closer and closer, and that will make us even better in the long run.”

Mayes is hopeful that Clemson’s recruiting class – which added two key commitments in the last week – will get even better. However, he tries to not put too much pressure on the prospects who haven’t made a decision.

“I try to not to say too much about it and just move on. I don’t want to attack them or harass them because they get that from the media and the fans any other time,” he said. “Instead of being another recruit that’s coming after them, I just don’t even want to. I want to say what I’ve got to say and then be done with it and not make it uncomfortable because it can be uncomfortable with the media and the fans.

“I’m very impressed but I also understand how much better we can get. We’re already a lot better than I thought we would be, but I believe we can get much better. I just believe if it ends up not being D.J. or it is D.J., that we have a lot of great talent coming to Clemson.”