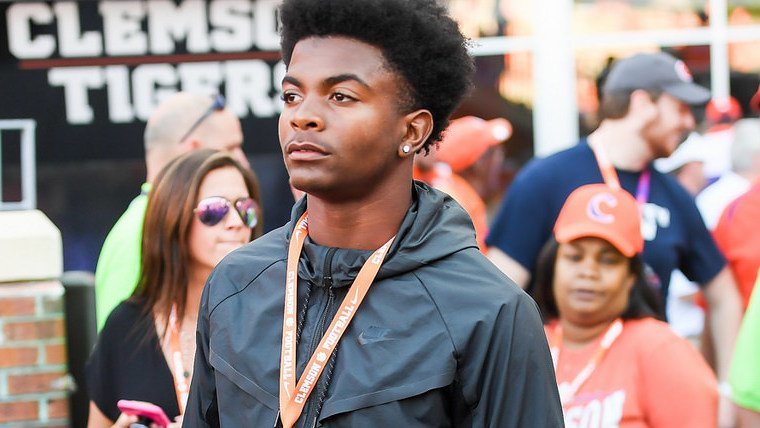 Phillips is shown here on a visit to Clemson last fall

Jalyn Phillips released a top-five Saturday, and despite not having a Clemson offer, the Tigers made the 4-star safety’s list of top schools ahead of his August 20th decision date.

Phillips named Alabama, Clemson, Oklahoma, Tennessee and Southern California as his top schools, but said that Clemson has ramped up communication this spring.

“I’m about to start taking summer visits. I hear from a few coaches from Clemson, Alabama, Nebraska, Oregon, Tennessee and Georgia,” Phillips told TigerNet after announcing his top-five. “The Clemson coaches are telling me that I’ve had a great spring and that they are still evaluating me.”

Phillips then broke down his top-five and what he likes about each school.

Alabama: “I have a good relationship with all of the coaches. I just see the way they grind every year to make it to a championship is amazing. Alabama is known for sending DBs to the league and I’ll have the man himself coaching me at DB (Nick Saban).”

Clemson: The atmosphere there is incredible! I have good relationship with all coaches! Coach Venables shows so much passion in running the defense that it gives me goosebumps. They are another program that stays in the winning column.”

Oklahoma: Coach Cooks and Coach Riley are two great men. Getting to spend the weekend with them during my official meant a lot. Their fans are crazy. They treat football as a religion. Another team that likes to win and aren’t afraid to play young guys.”

Tennessee: “I feel that Coach Pruitt is going to change things tremendously. He knows how to win and brought an amazing coaching staff along with him.”

USC: “Southern California has always been a favorite of west coast football. I got a chance to visit in the spring and it was amazing. I have a great relationship with Coach Bradford. He’s from Gwinnett so he knows a lot about where I come from, and he lets his guys play ball and have fun doing it!”