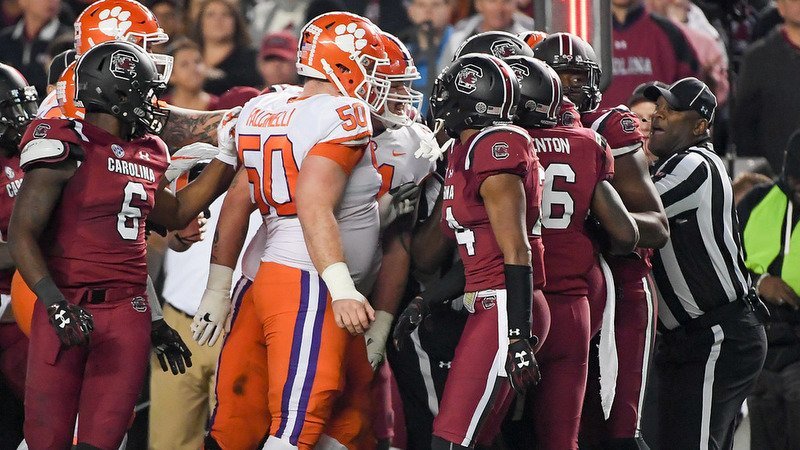 Justin Facinelli, Clemson’s starting center and Maryland native, made his first start for Clemson football in the 2017 season opener against Kent State, and ever since then has proven why he deserves his spot.

Part of the reason is his leadership, which happens both on and off the field. Sometimes, it even happens while playing video games.

“We’re just a bunch of brothers, we all hang out all the time, we’ll probably all go home and play fortnight together,” Falcinelli said earlier this week. “We like to give each other a hard time but we are a pretty tight group. Gage (Cervenka) he’s good at fortnight he’ll get like 9 to 10 kills every game.”

After Monday’s practice, Facinelli was asked how this 2018 offensive line was holding up against Clemson’s impressive defense.

“It’s tough, it makes every day tough, but we’re getting better, it makes us better, and hopefully makes them better to. So, we’re just going out there and getting after it”, Facinelli told TigerNet.

There is no doubt that practicing against Clemson’s defense benefits the offense by allowing real action practice, and Facinelli agrees.

Right tackle Tremayne Anchrum says this could be one of the best offensive lines Clemson fans have ever seen and Falcinelli agrees.

“We definitely have the potential for that we have so much experience coming back with all the guys we can plug in that have been here for three years,” Falcinelli said. “We just have experience in depth that we haven’t seen before.”

When asked what it will take to get to this point Facinelli had specific points.

“Right now, we have to work up to the consistency that we’ve had over the past years where we’re not giving up mental mistakes we’re finishing plays, we’re being more dominant.”

In the past Clemson has had key players return for their senior year which has allowed for a plug-and-play type style.

Yeah, and that’s how we like to keep it just plug-and-play,” Falcinelli said. “We have depth we haven’t had in years with guys like Sean, Cade, Matt, all those guys at guard, the tackles, Tremayne, Mitch, Chandler; we just have a depth we haven’t had so it’s nice to be able to rotate guys in. And they’ve (the new guys) have improved so much, knowledge-wise, technique, they’ve improved so much since the fall and just coming out. Jackson Carman, huge guy, great guy, he’s got a ways to go but he’s got a big body and going to be great.”

“You never really notice them until you hear them talk which is a good thing so we just keep rolling through.”

What he’s working on

“Lot of stuff is just finishing, a lot of times I just feel like im not finishing plays all the way and just small technique things, making sure I keep my pads low, keep my feet right. “