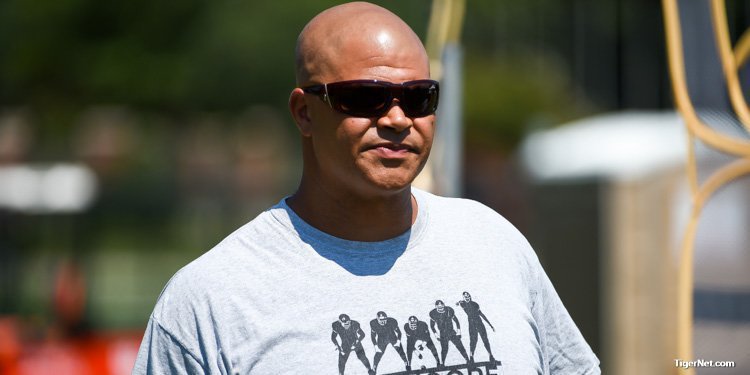 CLEMSON – Aaron Taylor watched Clemson practice for two days earlier this week, but the CBS college football analyst wasn’t lugubrious as he left town. In fact, he left impressed with what he saw.

Taylor serves as a game and studio analyst for CBS Sports. He was drafted out of Notre Dame, where he won the Lombardi Award and was a unanimous first-team All-America selection in 1993 as an offensive tackle. Before Clemson took on Notre Dame in 2015, Taylor drew the ire of Clemson fans everywhere when he said that the Tigers would not be prepared for the Fighting Irish and that the Tiger faithful would be left feeling "lugubrious."

According to the dictionary, lugubrious means "to look or sound sad and dismal." Clemson knocked off Notre Dame in a driving rain storm, and head coach Dabo Swinney had some words for Taylor once the game was over.

"I don't know who Aaron Taylor is, but I guess he is an analyst or commentator," Swinney said. "The comment was we were not going to be ready. Clemson wouldn't be ready, and our crowd was going to be lugubrious when the game was over. I don't know how to spell that. I'm hooked on phonics. I just sound it out. Lugubrious. But I did look it up and lugubrious means to look sad and disappointed.

"So I want to wish Notre Dame and their lugubrious crowd safe travels back to South Bend. And we will show up in 2020. We look forward to that trip. So, I appreciate the education that we got this week - the vocab lesson. The first thing our players said to me when they came to the locker room was 'man that leprechaun was a little lugubrious looking'."

Taylor smiled when reminded of the remark at practice this week, and said that the response from Clemson fans has been overwhelmingly positive and is a part of the passion of college football.

“Fantastic. It has been one of the best, most refreshing things that has happened to me in recent history because of the nature of this,” Taylor told TigerNet. “Everything that is good about college football - the ribbing, the busting and making fun of each other - is personified with this. Even the way Dabo responded. He came on our show the next week and had a great laugh about it. That personifies to me what's great about college football but particularly this university and it's been no different here today.”

He came away impressed with the 2017 Tigers.

“They looked the part,” he said. “The first thing when you get out of the car you go, 'That's a football team right there, now.' Particularly at the positions that I think matter the most in football - along the offensive and defensive lines. I think it's fair to say that this conference will have the best defensive lines in the country but this team probably has arguably the best and deepest unit in this conference and nationwide.

“I started the Joe Moore Award that goes to the most outstanding offensive line unit and I really like what I see with what Coach (Robbie) Caldwell is doing here with his group. Mitch (Hyatt), watching his development as a true freshman, being able to play at this level and now going into his third year. Their right guard (Tyrone Crowder), I certainly remember watching him play on tape and mauling people, so there's a lot to like here.”

Taylor was also impressed with the skill position players.

“The quarterbacks were as advertised. Deon Cain looked fantastic. It's pretty clear they like throwing the football to him and he can catch the football,” he said. “I don't see any reason why this team can't repeat and continue the evolution that they've had that culminated with a national championship last year. I think he's (Swinney) certainly proven he can reload from the defensive standpoint and now we're going to see if he can do it from an offensive standpoint and my guess is there's a greater chance than not that they do.

“They stand out just standing around on grass and then they put their hand in the ground and it's real really quick. Deon looked good just running and high-pointing the ball, his crisp routes, back-shoulder fades, putting his foot in the ground and creating separation, getting back to the ball. Kelly (Bryant), throwing the ball, putting some zip on it. Mostly a lot of go-routes and not a lot of intermediate stuff, crossing routes across the middle. Not a lot of that stuff. What stood out to me more than anything was how good everybody looked. This is a damn good football team and it's about to reload and have a hell of a year, I think.