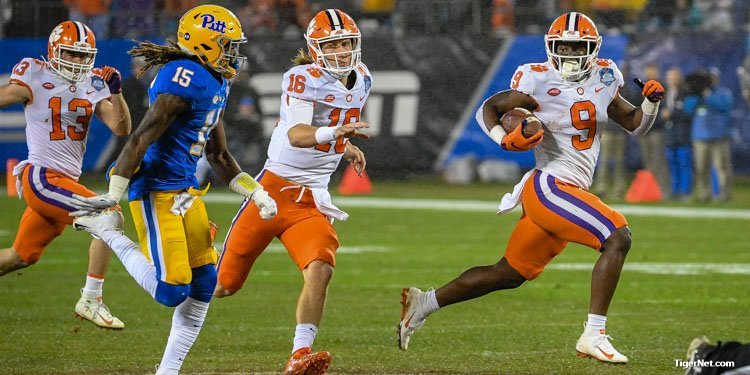 One ACC football analyst has taken a page out of Dabo Swinney’s book and says the Tigers’ biggest competition this season will come from within.

New ACC Network analyst Roddy Jones, a former wide receiver at Georgia Tech, was asked Wednesday if he will be making any bets on his Yellow Jackets when Tech and Clemson open the season and the network on August 29th.

His answer was a definite no.

“That Clemson machine is rolling down the tracks pretty steady,” Jones said.

Jones said that he sees Texas A&M as Clemson’s toughest matchup. The Aggies visit Clemson on September 7th in a 3:30 pm kickoff on ABC.

“Looking at the schedule, A&M is going to be a good football team,” Jones said. “A&M could be a stumbling block. Then maybe Syracuse. But the team that has the best shot is probably Texas A&M. But the only thing that is going to get in the way of Clemson going back to the College Football Playoff is Clemson. Unless you see a major resurgence out of Florida St. or Miami. Those two teams could be double-digit win teams this year but they still won’t give Clemson a game.”

Jones went on to say that the Clemson offense will be hard to stop, especially with a strong offensive line and returning skill players like Trevor Lawrence, Tee Higgins, Justyn Ross, and Travis Etienne.

“This offense is absolutely loaded and it will give the defense plenty of time to catch up,” Jones said. “That defensive line will just retool and reload. I am maybe most concerned about the linebacker position – that is a position where they just don’t have a lot of depth right now. Linebacker would be the main point of concern. I am not concerned about the DBs or the defensive line because they are so deep and talented. The leadership aspect of it – who is going to be that leader? We assume it would be Trevor Lawrence, but we don’t know.”

The Tigers had three defensive players taken in the first round of this year’s NFL Draft – Christian Wilkins, Clelin Ferrell, and Dexter Lawrence. Jones says that Clemson fans might be watching four future first rounders on offense this season.