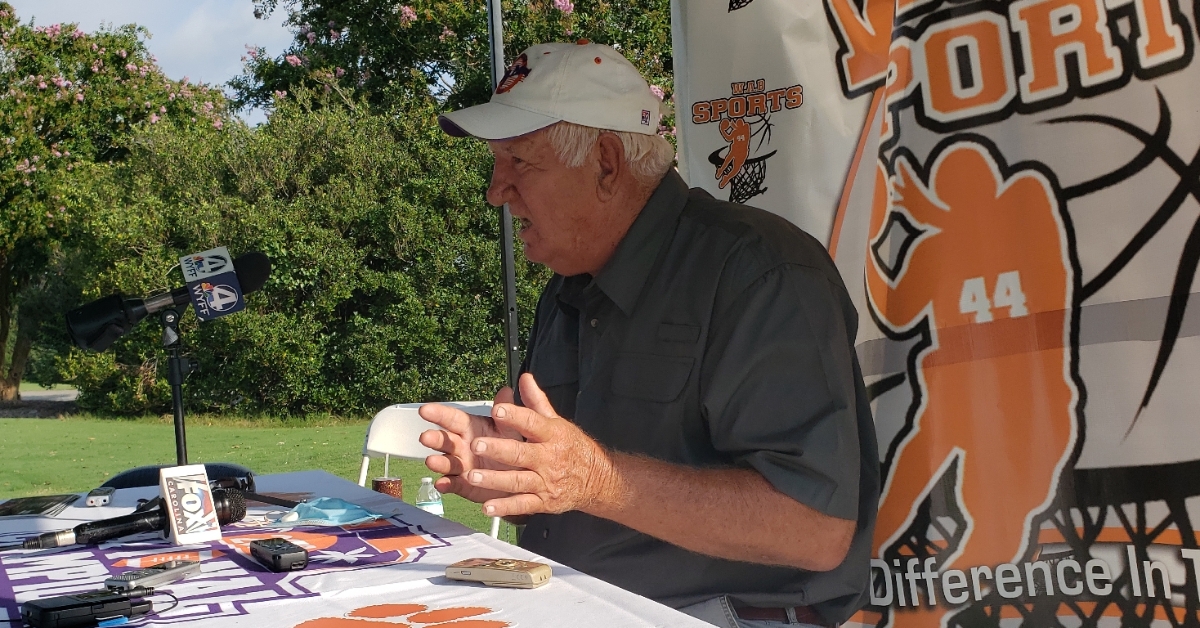 Ford speaks to the media Monday.

CLEMSON – Former Clemson coach Danny Ford sat down with the local media earlier this week and was asked if he would want to play a college football season in the face of COVID-19, or if he would preach caution. Ford preaches caution, simply because there are so many unknowns.

Ford was one of the celebrity guests at the Sharone Wright Benefit golf tournament Monday at the Walker Course, and he camped out on the 17th tee box to talk to golfers as they came by. Ford likes to give off an ‘aw shucks’ country boy vibe, but anyone that knows him understands he is shrewd, calculating and extremely smart.

It was obvious that he has given the situation a lot of thought, and his answers were revealing. When he was asked if he would want to play, if he were a head coach today, he said he would worry about the long-lasting effects of the disease, especially as it pertains to myocarditis (inflammation of the heart muscle).

“Two things I don't know. One is how many of my players are going to get it, and the second thing would be how is it going to affect them 30 years from now,” Ford said. “If it's a proven fact - which it's not - that it can affect your heart and other things and there are some indications that it could, you aren't putting your players in danger today but you are 20 years down the road. I won't see it, but 20 years down the road you are worried if all your kids are going to be healthy. We have a lot of our kids that have passed away already through different situations, with accidents and untimely death because of diseases or heart problems. But what if you had 15 or 20 of them die the same year? I don't have the answers.”

To Ford, it’s a gamble, one that schools can’t afford to lose.

“I think it’s a big gamble either way. It’s a gamble that you can’t lose,” Ford said. “There’s a gamble if you play of somebody dying or getting hurt. If you do play, you wonder why the other people didn’t play.”

“Anytime you have a split decision, somebody’s going to be right and somebody’s going to be wrong. You can’t afford to be wrong,” Ford said. “They lost playoff contention, they lost TV revenue, they lost money to operate the school on. ... On the other hand, if they start playing and don’t finish, how does that look? That don’t look real good. If you’re not going to finish, why did you start? And how much money did you waste starting that you could’ve used for different reasons

If football is played, Ford does know one thing –- he will watch it from the comfort of his living room.