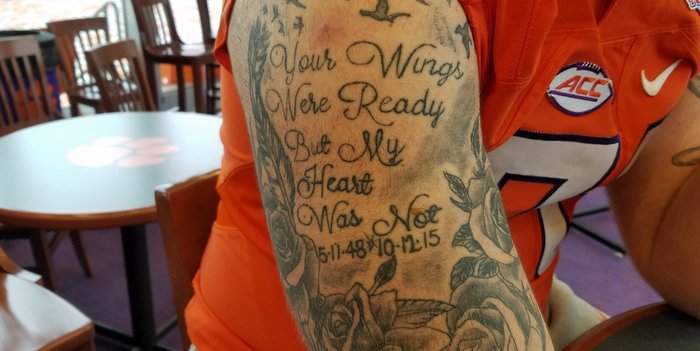 Pollard's right arm is in memory of Alma Cortes

CLEMSON – Every time Sean Pollard steps on the playing field, he feels a little chill and he knows she’s watching. Whenever he looks down at his right arm, he feels she’s near.

Clemson’s big and talented freshman right tackle exploded on the scene midseason, stepping into a starting role after then-starter Jake Fruhmorgen left the team for personal reasons. Pollard has handled the transition from backup to starter with ease, giving the Tigers a physical presence at the point of attack. By his own admission, there have a few rough spots, but he’s learning as he goes and he told TigerNet earlier this week that he’s been blessed to have the right kind of people push him to be better.

“I’ve just been blessed to get to this point. I've had so many people that have helped me get to this point in my life,” Pollard said. “My grandma, even though she has been gone for a year now, she pushed me to be my best every single day. And Coach (Robbie) Caldwell is an amazing coach, and he won't accept anything but your best. I don't really look back on it; I just know that I am blessed to be in the position that I am, and I know I have to keep working for it. And then I have people like Jay (Guillermo) to keep me humble.”

Pollard’s grandmother, Alma Cortes, was killed in a tragic car accident last October near her home in Pineville, N.C. A decorated City of Miami police officer, Cortes was Pollard’s rock throughout his life. Cortes was returning home when another driver swerved into her lane and hit her car head on.

One day, while perusing her Facebook page, he came upon an idea and now his right arm is dedicated to her memory.

“My whole arm is about her. She was killed in a car accident about five miles from my house while I was at school. I wanted to get a tattoo to honor her,” Pollard said. “When I looked at her Facebook page the last thing she posted was 'Your wings were ready but my heart was not.’ I knew then that I was for sure getting that.”

And when he walks on the field?

“His consistency. The way he prepares. He hasn't flinched. He just stepped in and the moment wasn't too big for him, but I think that speaks to how he prepared all spring and all summer,” Swinney said. “His mindset - he's very mature. He's a very serious guy. He's very serious about being a good player. It's important to him and it's obvious. It shows because you don't just show up over here and do what he's doing. You're having to to put some extra time and go above and beyond to prepare when you have that little experience. Same thing with (Tremayne) Anchrum, those two guys are great players. Anchrum, I think can play four positions. I think Pollard can play four positions. When it's all said and done, you'll see some cross-training with both of those guys. Really, really blessed to have Anchrum and Pollard. They're what you're looking for.”