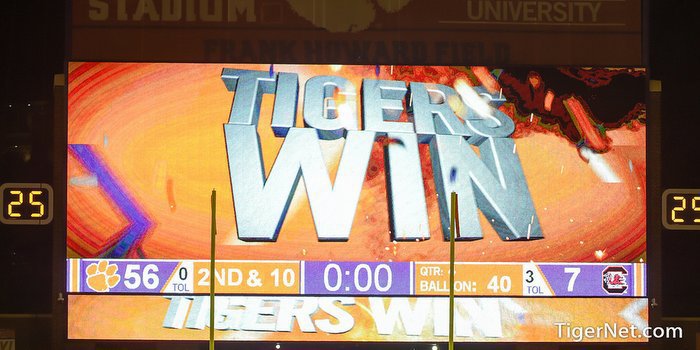 For most Clemson fans, the holidays will be a little sweeter than they were a few years ago. Why? Because it’s a great time to be a Tiger.

Clemson defeated South Carolina in basketball Wednesday night in Columbia, the program’s first-ever win over a ranked non-conference opponent on the road. That the win came at the expense of their hated rival has to make the victory just a tad sweeter for Clemson fans, and when I woke up this morning and perused social media and the boards, I realized that this has to be a special time for Clemson fans who put so much of themselves into the program they follow.

It also takes me back to, I think, 2012. Clemson had just endured another loss in football to South Carolina, and we met with head coach Dabo Swinney outside of the practice fields for another post-bowl practice interview. The subject of a four-game losing streak to the Gamecocks surfaced, and Swinney smiled and told us that while he was sure most fans believed the Tigers would never beat the Gamecocks again, he knew the rivalry would turn in the Tigers’ favor.

“I'm disappointed and just as disappointed as anybody else, but I don't sit around and just focus on the negative,” he said. “That's the society we live in, that's the world we live in where there are a lot of people out there that they're miserable people for that reason. All they want to focus on is the negative. That's it. When you live your life that way, you're never going to be happy. So no, I don't sit around and wake up every day miserable with life because we've got one major disappointment over the last few years. We've done too many great things.

“I know; I've been part of many rivalry games. I know these things can be cyclical and we've just got to turn it around. You've got to be honest. We understand reality and not the perception. We know what the reality is. The reality is we've lost five in a row, and nobody's happy about it. We know why. We know what we've got to do to turn that around, but we've got to go do it.”

At the time, the message boards didn’t take kindly to his “wait til next year” approach, but he knew it was getting close when Clemson outplayed South Carolina in almost all phases of the game and still lost in 2013. That was the last big moment for South Carolina, however, and Clemson has ascended into the nation’s elite.

Clemson defeated South Carolina in soccer, men’s basketball and took the season series from the Gamecocks in baseball this past spring. The football team has won three in a row. The present and future have never been brighter.

But the brightness you see here at the holiday season extends far beyond any rivalry.

If you haven’t been on campus recently and if you haven’t seen the construction going on, you’re missing out. The changes to core campus – with the new student hangouts and restaurants – are fabulous. I know people who don’t like change don’t like the new look of campus, especially with the loss of so many landmarks that are truly iconic to Clemson. But progress is a good thing, and this campus, always gorgeous to me, is getting a facelift that makes it one of the prettiest campuses in the country.

Add in what’s going on with athletics, and it truly is a good time to be a Tiger. The new football operations facility is almost complete, and it will be hands-down the best facility of its kind in the nation. Recruiting is at a high level. Doug Kingsmore Stadium got some much-needed improvements and is also in a class of its own. The new Littlejohn Coliseum is a vast improvement over the old, especially with the weight rooms, coaches’ offices and player lounges and locker rooms. It’s easier to recruit when you have the “eye candy” that recruits look for.

Basketball could make a run at an NCAA Tournament this season, and expectations are high for Monte Lee’s second season at the helm of the baseball program after winning the ACC in his first season.

Yes, it’s a good time to be a Tiger, and there is an air of expectation around the athletic offices and on campus itself. A report was released this week that says out of the Top 25 football teams, Clemson ranks second behind Stanford in academics. That in itself is pretty special. Add in the fact that Swinney's Tigers continue to win and graduate players, and you have a special time.