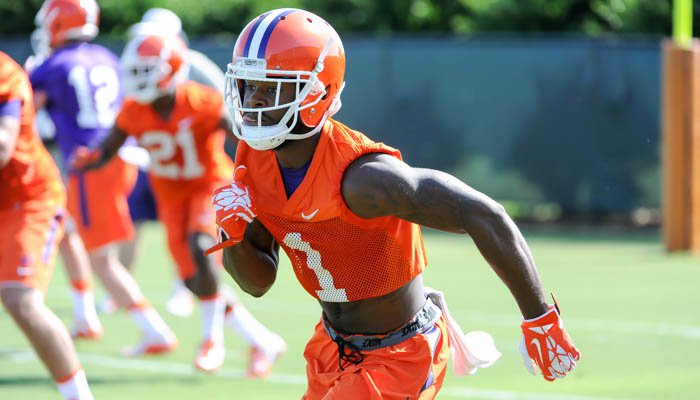 Swinney said WR Trevion Thompson has been the best WR so far.

CLEMSON - If football games were won on looks alone, the Clemson Tigers would be crowned national champions.

The bad news for Dabo Swinney

Dabo Swinney
Head Coach
View Full Profile is that it takes more than just good looks to win games, but Clemson's head coach will learn more tomorrow when his team puts on shells for the first time. However, he told the media after the second practice of fall camp that he's pleased with what he's seen so far.

"We're a good looking team. If it were a beauty pageant, we'd be in the hunt big time. Overall, through the first two days, our execution has been pretty good," Swinney told the media following Wednesday's practice. "Tomorrow we get the pads on - the shells on. It's really hard to be able to do what you need to do in shorts. You can get a lot of assignment work, but it's difficult when you've got a bunch of guys who have been pinned up all summer doing skills and drills against each other and grinding in the weight room."

"It's really not close between our second team and our third team, but we've only had two days. It's good to see Kelly [Bryant] better than he was the last time I saw him - just his knowledge of the system, his confidence and command and presence on the field is much better," Swinney said. "Hopefully he can close the gap a little bit as we go through camp. Nick is definitely ahead, and it's really not close right now."

Tucker Israel
Fr. Quarterback
#10 5-11, 190
Orlando, FL
View Full Profile will have a lot of catching up to do when he returns from a broken metatarsal.

However, Swinney said Israel will still have the opportunity to avoid a redshirt.

“We were hoping to go through camp and let those guys compete, but it’s hard to compete when you can’t be on the field,” he said. “That’s a lot of opportunity for Kelly. Tucker is not out of it. Who knows what’s going to happen between now and September 5th. They’re going to put a screw in, and he should be back in four weeks. He’ll be back and get seven or eight games, and anything can happen.”

The player who has surprised Swinney the most?

Trevion Thompson
RS Fr. Wide Receiver
#1 6-2, 195
Durham, NC
View Full Profile has probably looked the best out of anybody out there and the first person asked about was Deon (Cain). That's the problem with recruiting. He's been the best guy out there," Swinney said.