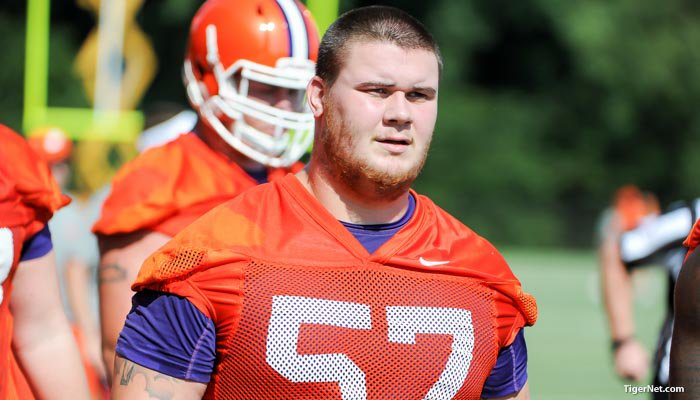 But what if the pain isn’t physical? What if the pain is inside of you, gnawing at your mind and your heart, day after day? What if you can’t talk about it with your coaches or teammates, who would simply tell you to suck it up and keep playing? What if nobody out there would understand what you’re going through?

Guillermo left the program – and school – last winter to deal with just that. His journey back to the program and to playing in last Saturday’s opener against Wofford is now well-documented. At the time, the coaches said that Guillermo was dealing with a personal issue, and many have wondered just what type of issue the Tennessee native was dealing with.

Monday, Guillermo told TigerNet that it was depression, and he hopes his story can help someone else who is trying to face up to their demons and get back to normal.

“I just got extremely depressed. I didn't really want to tell anyone because I'm not really a person that opens up to people,” Guillermo said in a sit-down interview with TigerNet Monday. “I don't like to talk to people. I'll goof around, but at the end of the day I live in a one-person apartment, and I like to be on my own. I got really, really depressed, and I started having pretty terrible thoughts. I woke up one morning, and I was like I need to get help or it's going to consume me. I had a step brother a few years ago who actually committed suicide, so I saw the toll that it took on my stepmother and my dad and their whole family, so I didn't want to go down that path.”

I asked Guillermo about the terrible thoughts he was having, and he said they were extreme.

“I had thoughts of suicide. I didn't really know what I wanted to do,” he said. “No matter what anyone told me I was having worthless thoughts. I didn't know what I wanted to. I've always looked at depression as, 'It's not that bad. Get your stuff together. I know that's not how you should look at it. My whole mentality has always been, 'Get it together. You're fine,' and that's with an injury or anything. As football players it's always been we're mentally strong so you don't want to accept that you feel that way.”

Guillermo finally reached his breaking point in February, and he realized he needed help.

“I just woke up, and I was like I do not need to be thinking this. It's not what I need to be doing,” he said. “I had let my body go. I didn't have any football responsibilities since January because I had talked to Coach (Dabo) Swinney. I had kind of become defiant almost, and I was like I'm not going to do it, and that's not me. If anyone knows me, they know that I pride myself on being a hard worker. My whole family - I still have a 91-year-old great grandfather who almost lost his feet in the Ardennes Forest and until this past year he’s been up working around with my grandfather.

“You know my grandfather over at Burns High School in North Carolina, I remember days when he would be out on the tractor by himself. He would cut all of the grass. He did all of the landscaping, and there were trees that lined the fence and he did all of that. For me, working defines a manhood. Even during the summer one of the coaches - we were going through a drill, and he said it looked lackadaisical, and it wasn't working - and that fired me right up. That's kind of like challenging my manhood.”

His defiance almost cost him a spot on the team, and it was then he realized he had to ask for help.

“I was kind of defiant towards Coach Swinney. I was just like I'm not going to do it, and as bad as that sounds it was more of I was anxious about my weight because I had gained weight, and I had found a way to hide it from the coaches,” he said. “I found a way to cheat the system, so I knew I was going to come in, and there was no way that I can hide it anymore. I started feeling anxiety, and that kept going into my depression. It wasn't like he was telling me, ‘you have to do that’ and that I was saying, ‘no I'm not.’ It was just of thing of, 'Coach, I don't feel like I can.' After I talked with our team psychologist, he said he felt like I needed to go get help. I was defiant of it at first, and I was like, 'I don't need help,' because help is for people who are weak. I kind of realized that I did, and I needed it a lot.”

Once his cry for help was heard, he found the perfect place to try and get his life back to some semblance of normal.

“I actually went to a place called Legacy Freedom in Charlotte. A guy who went to high school with my dad, he's real high up in it,” Guillermo said. “It's actually for substance abuse. Substance abuse a lot of times stems from depression and anxiety, so I went there. I was going there three times a week. I was seeing a counselor, and she was awesome. I talked with her all of those times. I would have to go to group meetings. My case was a little different because it was just more towards depression than substance abuse. Just seeing those people and how they had the courage to say I need help and to not fight it and to be there and do what they had to do led me through the way.

“There are people in horrible situations that have to move to Charlotte because they live somewhere else and they have to move hours away from their family to do what they need to do, so that kind of brought me to a mindset of if they can do it then I can do it. It wasn't easy, and there were a lot of days that I thought I don't want to go and I don't need it. I would kind of revert back, and then something in my head would say, 'Jay, you need to be there. You need to go. Don't fall into the trap that you were before.'”

Guillermo keeps in regular contact with his counselor, but also relies on the resources available at Clemson.

“I actually talk with her over the phone some,” he said. “I'll have little chats with our team psychologist here. I really haven't been doing a great job of it, but I'm going to have something to keep me accountable. I really want to use Jeff Davis as a tool because he's like our life coach. He's gone through things, and he's seen things and he's just a great man to talk to not only with life but spiritually. That's something I kind of got away from and I questioned why this was happening to me.”

I told Guillermo that it would be hard for many to people to understand how a football player – adored by thousands – could get depressed, and he smiled a sad smile and said not everyone will be able to understand it.

“It's not easy to explain because you don't really know unless you've been in it or around it. It's something that not everyone is going to understand. It's not easy,” he said. “It's kind of like I've got a little new respect for these movie stars. There have been a couple people like Robin Williams. You look at him, and you're like, 'Dude, you're Robin Williams. It can't be that bad.' I was one of the people who fell into that. This, what I'm doing, is just a small thing compared to what they do. I've had people ask me how you get depressed. Well, it's pretty easy. I started feel like fans are just fans, and they don't care about me. They just care about me on Saturday.

“My head started turning people against me. It just happens, and it can happen to anyone. I've talked to a few guys here who are like, 'I felt that same way, and I didn't feel like I needed anything, and you've helped me get through it.' That was kind of encouraging. It's something that a lot of people face. I just read something over the summer that my counselor sent me about a player in Georgia who battled depression and his fight through it. It happens to people, and it's unfortunate. Today depression is such a loosely used term. You wake up, and you're like, 'I don't feel good. I'm depressed.' Depression is something that really consumes you and that you can't run from. You can try and use other things to make you happy, but it's not going to happen.”

His journey isn’t complete, but playing in Saturday’s game was a step in the right direction. And it made him glad he fought and asked for help.

“During pregame, I was all jacked up, and I was running around thinking this was a great feeling,” he said. “But it really hit me when we were coming around on the buses, and then I was there at the top of the hill. I was looking around, and I was rubbing the rock, and I was like, ‘This is worth it all. This is why I came back. This is confirmation.’ And then I get into the game, and there were the first game back jitters. I tried to soak it all in, and not get too emotional. But it was an experience.”

It’s an experience he can add to a lifetime of experiences he’s had over the last seven months, but he hopes his experiences can help others. If you need help, ask for it. Even if you’re a tough football player.