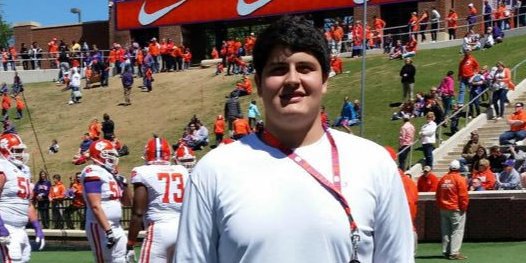 One of the region’s top offensive linemen for the 2019 cycle has been in contact with Clemson offensive line coach Robbie Caldwell for over a year, and that relationship paid off with an offer last week.

Belleview (FL) offensive tackle Michael Tarquin has been reeling in the offers lately, and that included Caldwell reaching out to Tarquin’s head coach with an official Clemson offer.

“It was huge. I love Clemson and it’s a great place,” Tarquin told TigerNet. “I’m just really happy about it. It (the relationship with Caldwell) even started a few months before that. I started talking to him during the spring or summer time of my freshman year.

“Coach Caldwell came to my school and told my coach. I talked to Coach Caldwell later on the phone. He basically just keeps telling me that he loves my film and loves my size. He really wants me to be a Tiger and he’s going to try really hard to get me to come to Clemson.”

His father attended school at Michigan State and the Spartans jumped on board last weekend. Last week, in addition to Clemson, Ohio State, Michigan, Auburn, Texas A&M and Tennessee all offered.

South Carolina offered in early March, followed by a group including Miami, Louisville, and Mississippi State.

The 6-5, 290-pound offensive tackle plans to make a trip to several schools during the summer and hopes to be on Clemson’s campus June 12th. He camped for three days at head coach Dabo Swinney’s camp last summer, but instead of camping this time around he wants to take in the surroundings and learn more about the people at Clemson.

He recently visited Miami with his parents and hopes to also see Auburn, Michigan, Ohio State and Michigan State.

“I’m going to visit Clemson this summer. I’ve been there twice,” Tarquin said. “Maybe I’m not looking so much at what Clemson is like because I already know it’s a great program and they can win. I know the facilities are crazy. The most important thing for me is getting to know the people. I know Coach Caldwell is a great person and Coach Swinney seems like a great guy. I know he’s a good coach. I’m excited to meet everybody up there.”

Tarquin told TigerNet he plans to enroll early and hopes to make a decision maybe as early as next summer. In the meantime, the Tigers have staying power.

“I really love Clemson. They’re high on my list and I can’t wait to visit them,” he said.

“I’ve known Blake for two years now. He’s helped me out a lot with offensive line play and working out, just football overall,” Tarquin said. “He’s a good friend of mine. He’s always told me that he loves Clemson and that Clemson is a great and special place.”