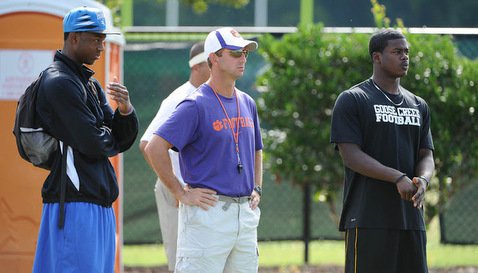 CLEMSON – The traditional gift for a five-year anniversary is wood, but Clemson head coach Dabo Swinney

Five years ago Sunday, Swinney was named the interim head coach at Clemson after the departure of Tommy Bowden, a move that he later turned into the full-time job. As you look at programs around the country, only 24 of the 125 FBS programs hired their current head coaches before 2008, and if you include Swinney, six made changes for the 2008 season.

A whopping 30 programs made changes after last season, a staggering 24% of the nation’s programs.

However, Johnson, Jones and Pelini have all been mentioned as being on the hot seats at their respective schools, while Cutcliffe seems safe at Duke. Briles has turned Baylor into a national contender, and will have his share of job offers at the end of this season.

That leaves Swinney, who has the Clemson program headed in the right direction. Swinney and his coaching staff have the Tigers playing well, ranked high in the national polls and they are recruiting well. As ESPN analyst David Pollack told me before the season opener against Georgia, the arrow is definitely pointing up for the Clemson program.

Sunday was the five-year anniversary for Swinney, and he took a moment during his Sunday teleconference to reflect on that time.

“Five years ago today I was on the practice field and I had just been named the interim coach,” he said. “It’s just awesome to be where we are. Five years later, it’s neat to be where we are and to have an opportunity to go be relevant again. I look forward to getting back out there and getting the Valley going Saturday night.”

Swinney said Tuesday that he thinks the Tigers have had good teams in the past, but now he feels like the entire program is solid, from top to bottom.

“And then carry it over to this year, trying to cut that margin down a little bit more, take another step. But the biggest thing is we're set up to sustain success here because of the culture that we have, because of the things that we have in place that I believe with all my heart that you've got to have to be successful. It's bigger than any player. When Tajh Boyd

Brent Venables
Defensive Coordinator / Linebackers
View Full Profile after the Orange Bowl debacle. In both instances, he fired coordinators he hand picked when he was named the head coach, and he hasn’t hesitated to make other staff changes where needed.

He has also hired assistants who are good on the recruiting trail, and the Tigers are recruiting at a high level.

“I really like where we are from a program standpoint, and I think we're set up to have success consistently, and that you've got to continue to recruit well because when you don't recruit well, you have a problem,” he said. “Nuk Hopkins left; Mike Williams

Mike Williams
Fr. Wide Receiver
#7 6-5, 205
Vance, SC
View Full Profile is going to be pretty good. He's better as a freshman than Nuk was as a freshman. It's not even really close. Now, will he develop the same? We'll see.”

Swinney then said he was also excited about the direction of the program, and whether Clemson loses or wins Saturday’s matchup against Florida St., the arrow is still pointing in the right direction.

“But I get excited. That's just college football. But I really like our program, I like where we are, I like the things we've got in place, but we've got to continue to get better,” he said. “You can't ever be satisfied. There is no finish line. You've got to constantly check yourself. You've got to constantly check others and do a great job in recruiting the right people in here, the right type of character in here, and having the right type of discipline. If you do that, we've got a chance to be consistently successful. “