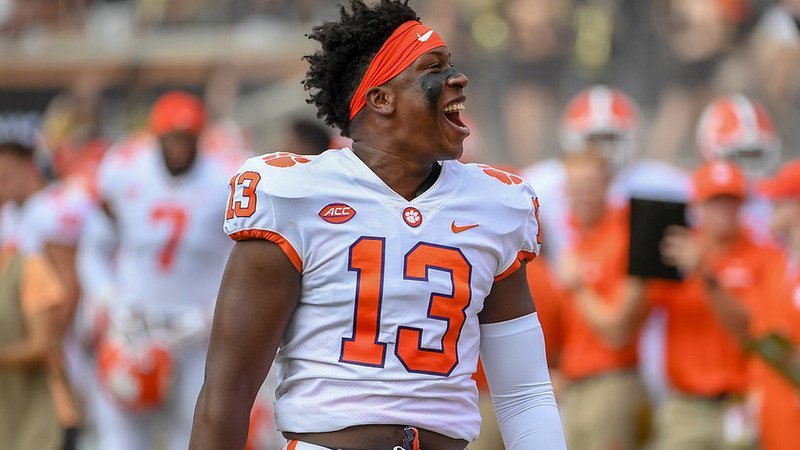 Henry shows his passion after making a play

Most 5-star prospects head to college in the hopes of not only making an impact their freshman year but starting. Not KJ Henry, who approached the Clemson coaches with the idea that a redshirt season might be beneficial in the long run.

Henry was one of the nation’s top recruits last season at West Forsyth High School in Winston-Salem, N.C. Henry was rated the top prospect in the state, the No. 3 defensive lineman in the country and the No. 6 player overall by ESPN.

Most programs in the country couldn’t afford to redshirt a player of Henry’s caliber, but the Tigers have depth at Henry’s defensive end spot – Austin Bryant, Clelin Ferrell, Xavier Thomas, Justin Foster, Logan Rudolph, and Chris Register get snaps each week – and Henry approached the coaches with the idea of redshirting.

“That is just kind of who he is. He has one of those Christian Wilkins types of personalities. He is very aware,” Swinney said Wednesday. “I kind of challenged him on that a little bit because I know where he is and I know how he has improved - he is going to be a great player. But he loves it. He loves his role, and he loves his teammates. He enjoys being over there on the scout team, and he is enjoying his experience. He is an unbelievable teammate.”

Defensive coordinator Brent Venables said the coaches are fortunate that Henry doesn’t have to play.

"KJ was somebody that really felt like he could benefit from a redshirt year," Venables said. “He's the one that pushed that agenda. We weren't against it; we just didn't know how our position was gonna be. We didn't have any intention to redshirt any of them until we had a chance to go out and evaluate them. He's long, athletic, disruptive - but, we have a group right now where we don't have to play him. He's all for it and the benefits of power hour are really going to make a difference for him. We're really excited about KJ and what he has shown so far."

Henry played in four games this season – the maximum number allowable to maintain eligibility for a redshirt. Henry logged 39 snaps and had nine tackles, including two tackles for loss. Five of his tackles and both tackles for loss came on Oct. 6 in the Tigers' 63-3 victory at Wake Forest, his hometown team.

That means Henry is ready to step back in and play if needed.

“If we have to have him, we made a little deal. If we have some injuries and something happens, then all bets are off. But if we can, we will,” Swinney said. “For him, it was, 'Hey coach, I know I need to get stronger and I need to get in power hour. I just know it's going to help me be the dominant player that I wanna be.' And I love that, that self-awareness. And we are fortunate that we can do that right now. But at the same time, we wanted to go ahead and get him ready for the season.

“He played in four out of six games, and he traveled with us for seven weeks or whatever - hotel, game plan, travel, reps, the whole deal, so he is ready to go play if we need him. But hopefully, we can hold him, and it will be a win-win for everybody. He is going to be a special player for sure. A special leader. No doubt about it.”