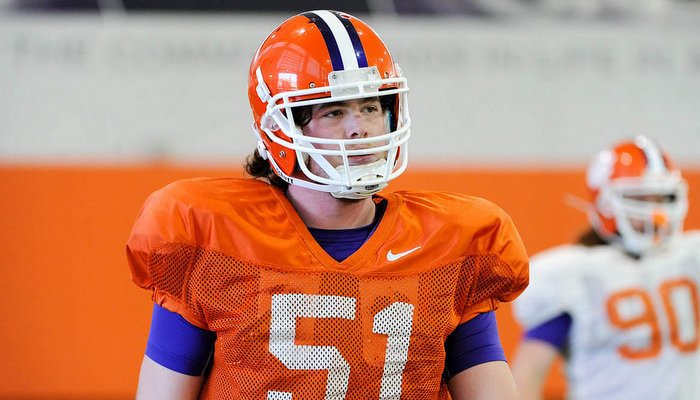 Jim Brown was awarded with his scholarship earlier this week

Brown will be the starting long snapper for the Tigers this season, his fifth in the program. The 6-4, 230-pounder out of Walterboro (SC) has waited patiently for his chance, sitting behind Michael Sobeski

“I heard Korie quit, and I wish him the best because he is a great guy,” Brown said. “But I thought that might be my chance. I was hoping and praying. I was super excited because it's a dream come true and something I've been waiting on for five years.”

Teasdall is a redshirt junior punter out of Winston-Salem, and he learned he would be on scholarship at the team’s lake day last week. Teasdall told TigerNet that he was just looking for a chance and he got it when former punter Bradley Pinion

“It feels really good. I put a lot of work into it, and I am thankful to have the opportunity to even be on this team,” Teasdall said. “To be placed on scholarship is a privilege to be taken seriously. To take the financial issue out of the way is something to be proud of and something I won't take for granted. I was hoping for it. I guess I was wanting it, and I was kind of expecting it. But when he called me up there at that point I wasn't expecting it to happen right then. That was kind of a cool moment. I saw the video that they had, and the fact that it will be with me for the rest of my life is pretty special. To have Hunter Renfrow

Brown said that his teammates are what kept him going, practice after practice and workout after workout through his first four years.

“Part of it is the team. I have a bunch of guys who care and a bunch of good teammates that made me want to stick around,” Brown said. “I also wanted to finish what I started. I try and finish everything I begin, so I am doubly happy about it.”

Brown said he doesn’t care if Clemson fans know his name – he just wants to be on the field when it matters.

“You get thanked when nobody says anything,” Brown said. “You make a bad snap, and you get hung out for it or yelled at for it. You don't really ever get thanked for a good snap, and that is okay with me. I will do my job and get out, and I hope nobody has to know my name. It's a thankless job, and I am okay with that.”

Brown said he was able to break the news to his mother, bringing her to tears while she was shopping. Teasdall was a different story.

“I am a terrible liar. I was with Nick Schuessler

Nick Schuessler
RS Jr. Quarterback
#12 6-3, 195
Grayson, GA
View Full Profile and he told me to act like something bad had happened,” Teasdall said. “We thought that would be pretty funny. But I am a bad liar and I told her I was put on scholarship. It wasn't as funny as it could have been. My parents were proud of me and proud that the hard work has been rewarded.”