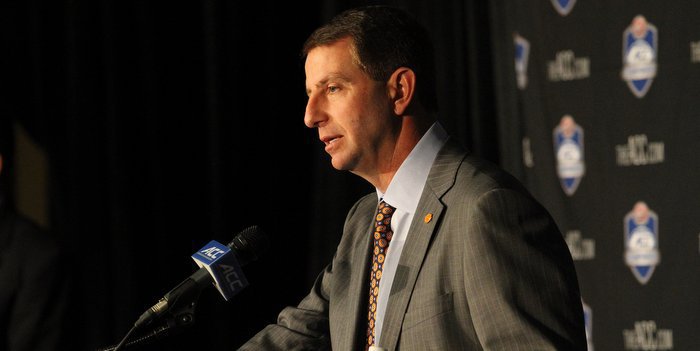 Swinney speaks with the media Friday at Camping World Stadium

Clemson head coach Dabo Swinney was asked Friday about a headline that he would write for his team to describe this season, and he said it would be all about finishing strong.

Swinney’s third-ranked Tigers take on 19th-ranked Virginia Tech Saturday in the ACC Championship Game, and Swinney said that finishing strong is the story of the season.

“If I can write a headline? I would just say that Clemson’s had a tremendous season and now they have an opportunity to finish strong with another ACC Championship,” Swinney said during a press conference at Camping World Stadium. “That’s really the story. I think that says it all. We’ve had a great year, 11-1 and we’re in the championship game and it’s all about the finish now. That’s what everybody that’s what the last headline is everybody going to remember is that last one, and so our focus is to try and finish what we set out to do.”

This is Clemson’s fourth trip to the title game under Swinney – and the second consecutive trip – and Swinney said the Tigers will rely on that experience when facing a Virginia Tech team that hasn’t been in the championship game since losing to Clemson in 2011.

“I think the experience for our team last year was tremendous. We don’t really do anything different,” he said. “It’s just it’s the next game. It’s the championship game. There is no next Saturday, but as far as our preparation, we don’t really do anything different. It’s the same as far as how we get ready. We truly believe every game is a championship game. That’s how you get to these type games is you have that mentality all throughout the season because if you don’t, then you have a hard time getting to this spot. But the biggest difference is these guys know that truly, every play Saturday night is a championship play and somebody’s going to hold the trophy up when the game is over. 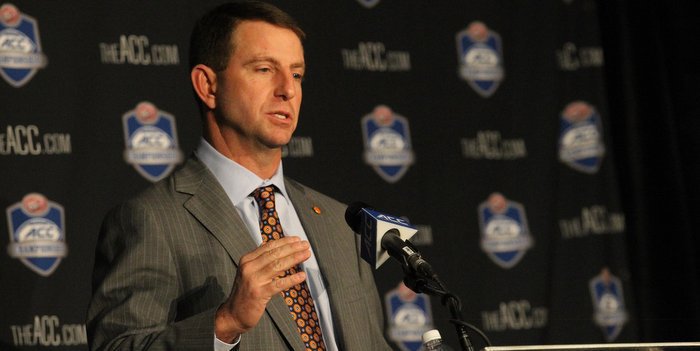 Swinney speaks with the media Friday at Camping World Stadium "

“There is no game next week. These guys are going to be off for a little over a week, a well-deserved break for them, and, we know we’ve got to earn it. And I think the experience that they’ve drawn from last year of playing in this 13th game is priceless. I think experience is your greatest teacher and we’ve got great leadership that is doing an unbelievable job in leading our young team, because we’ve got a bunch of young guys, bunch of guys that didn’t play last year, a bunch of freshmen that are helping us and these seniors and juniors have done an outstanding job.”

Tech head coach Justin Fuente is in his first season in Blacksburg, and he said he is bringing a tough team into the championship.

“Well, for us it’s about hard, smart and tough. I think we want to be known as a group of people that whether it’s on the football field or off the football field, we work hard in the classroom, in the community, on the field,” Fuente said. “We have an intelligent group of kids that play the game the right way. They play smart football. Do well in school and a group of guys that are tough regardless of circumstances, whether it’s rain or cold weather or wind, or you’re up or you’re down or you’re doing well or you’re not. Our guys battle through, and that’s the mentality we’ve instilled since day one.”

Swinney said his team isn’t bothered by outside distractions because they know what it feels like to lose a big game.

“These guys have been locked in and dialed in on the finish. I promise you. There ain’t none of them guys they’re a hundred percent locked in on winning,” he said. “There’s been some pain in this team that has fueled their fire all year long, and they want to finish with no regrets. They all can see the finish line, and they all know it’s coming. But they ain’t worried about it. They want to finish with no regrets. They want to win. That’s all they’re worried about, and that’s the type of leadership that we’ve had with this team all year long. So it really wasn’t even more of that. They’re graduating, and they’re ready to go.”