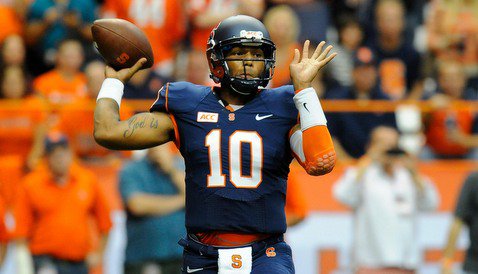 SYRACUSE, NY – The Carrier Dome was as hot as a July 4th picnic down on the Grand Strand.

However, that was only in the small room we had for the postgame press conference, a room about half the size of a normal school classroom. Packed into that small space were about 60 members of the media, with coaches and players and even what looked like some fans hanging around.

For the first time all night, the Carrier Dome was as hot as advertised. However, when we walked onto the field for pregame, the thermometer they have embedded into the clock read 66 degrees before the game, and it never got any warmer than 68 during the game.

Despite the crowd and the promises of a sweltering environment, the heat never really materialized for the players or fans.

As for loud – there were a few times when that place got really loud. They were loud when the team came on the field before the game, and they were loud several times when Clemson had a third down. As loud as Death Valley, South Carolina at times, or places like Auburn when we were there in 2010? Not quite, but for just under 50,000 fans, it was nice environment.

*Clemson’s defense played more man coverage than I have seen in quite a while. I am not sure if that speaks to the fact that defensive coordinator Brent Venables didn’t think Syracuse could win through the air, or if he is trusting his corners more and more as the season goes along. Bashaud Breeland is playing at a high level, and came up with a big interception Saturday night.

*Syracuse quarterback Terrel Hunt talked a little smack during the week, and from our vantage point in the press box, they did even more of it down on the field. Even when down by three and four touchdowns, there was a lot of showboating and mouthing going on down on the field.

I asked Clemson corner Darius Robinson if ‘Cuse talked a little more than he expected, and he said yes.

In fact, the game was downright strange considering that Orange head coach Scott Shafer threw a profanity-laced barrage at Clemson head coach Dabo Swinney before halftime, got caught by the cameras calling one official a bleeping moron, and then ran all the way down inside the five-yard line at one point to berate yet another official.

At one point in the game, defensive back Julian Whigham produced his best dance floor moves for the faithful after breaking up a pass. And he was down by four touchdowns at the time.

The good news is that Clemson did all of its talking on the field, and this was one really just wasn’t competitive at any point.

*Here is a stat for you – Syracuse completed 12 passes on the game, and only one went to a wide receiver. That covered six yards. The other 11 were to running backs, the tight end and the quarterback. Yep, the quarterback caught as many passes as the ‘Cuse receivers.

*Hunt had a miserable time of it, despite his brash talking during the week. He wound up completing just 8-of-24 passes for a paltry 52 yards and three interceptions.

After the game, he told the media that the Orange did a lot to beat themselves.

“Very disappointing. At the same time we lost to a good team, we actually beat ourselves too,” Hunt said. “They are a good team at the end of the day. We had a couple of things we should have maximized on, but we didn't and so be it. We just got to take it on the chin and go into next week.”

Sophomore running back Ashton Broyld said Syracuse had Clemson’s defense right where they wanted them.

“We saw exactly what we saw on film. We got exactly what we saw on film,” he said. “It was just a little bit more man coverage than we expected. At the end of the day, we got to play football. We didn't play our best football today and we know that. It was a time and a point where we had them. We had them right where we wanted and we just didn't execute, and that's what we come back for on Monday, to get better and tighten up the little things.”

*Running the football wasn’t easy, and I heard one radio host say this week that Clemson wouldn’t rush for 150 yards against the Orange. They rushed for 158, but it wasn’t easy. Syracuse sells out to stop the run and to bring pressure, and they frequently bring more than you can block. The downside of that is that you leave your secondary all alone against some pretty good receivers, and we saw what happened in the passing game.

However, Zac Brooks rushed nine times for 46 yards, a 5.1 yards per carry average. I think he needs to see the field more.

*Finally, the Syracuse staff and people at the Dome were over-the-top nice, and we met a lot of great fans over our three days here in this part of the country. The staff at the Dome was extremely helpful, and we couldn’t have asked for anything more.

*After getting back to the hotel room late Saturday, I opened up my Facebook and saw the usual postgame thoughts from fans. However, I noticed that several fans were blasting the defense for giving up 323 yards on the ground to the Syracuse offense, and I am sure that defensive coordinator Brent Venables isn’t happy with that number, either.

However, Clemson’s defense held its fourth straight opponent to 14 points or fewer, something that hasn’t been done since the 2000 season. The front four is getting pressure on the quarterback, the secondary looks better and better each week, and Vic Beasley leads the nation in sacks.

This unit doesn’t have to be great and throw shutout numbers on the board for this team to win games. It just has to be good. And so far, they have been good and look to be getting better in certain areas.