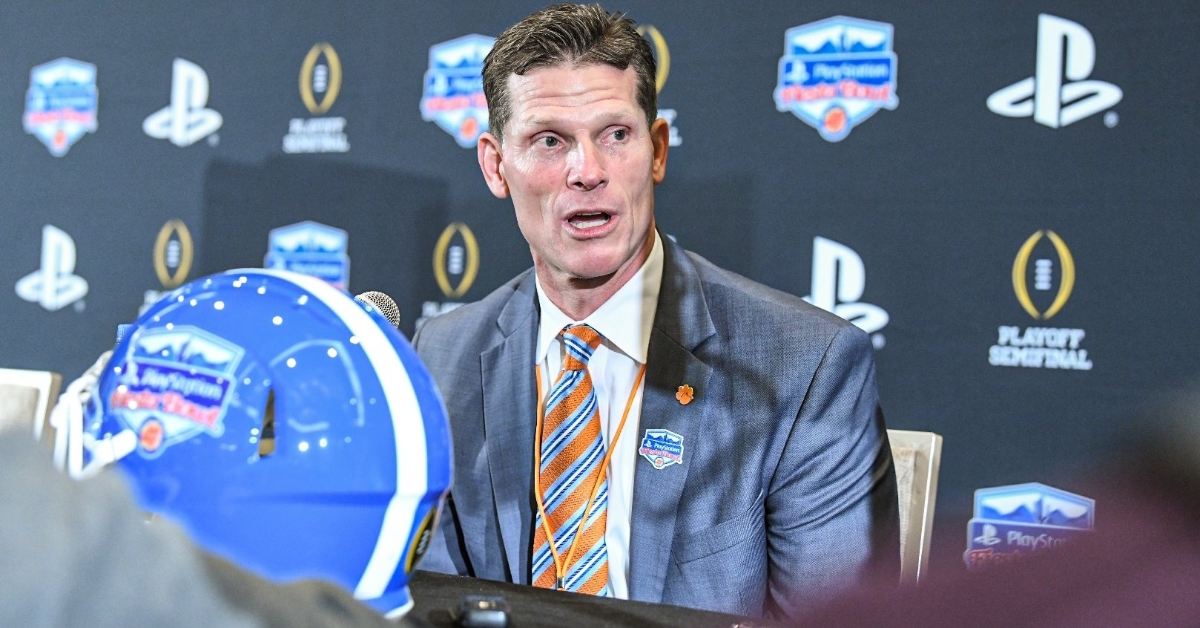 Brent Venables is proud of what his defense has accomplished this season.

SCOTTSDALE, AZ – Clemson coordinators and three players each from the offense and defense met with the media Tuesday morning at The Camelback Resort to preview Saturday’s Fiesta Bowl between Ohio St. and Clemson.

Here are a few quotes and notes from the availability with the defense with more to follow:

Brent Venables on changing the look of his defense this season

“I think every year is different. You have a system and a philosophy. We're aggressive. We're press man-to-man. We're probably a little more multiple this year because we feel like we've had to do that. And some years you don't. A year ago, everybody is like, Oh, you don't have to do anything. You can just rush four all day. That's not true. You're getting different kinds of protections, people are chipping and sliding and everything else. You've still got to find ways to generate pressure.

“So I think our philosophy, without question, has been the same. This year we felt like we've had to be a little bit more multiple and play to our strengths, which has been our back seven and try to help our young guys. We have one starter on our defensive line that's ever started a college football game. That's what we rolled out there with at fall camp. Two of the starters, not including Tyler Davis who has become a starter, but Jordan Williams and Nyles Pinckney, they did nothing from January all the way until the first day of fall camp. Nothing with the football team. So they were going through different rehabs and some missed winter conditions, summer drills.”

Isaiah Simmons on if he expects Ohio St. to give JK Dobbins the ball 30 times

“I would assume so. I give one of my best players the ball. Nobody has really stopped him, so it kind of makes sense. Why not keep giving him the ball if nobody can stop him?”

Simmons on Clemson’s schedule and proving the doubters wrong

“Yeah. A lot of people think we're not supposed to be here. So, I guess it's more to prove them wrong, because apparently we didn't play anyone. That's been the rhetoric out there. I would probably say, yeah, we've got a chip on our shoulder, something to play for.”

“It would mean a lot. Nobody's been 30-0 ever with back-to-back CFP national championships. So to make history would be awesome. We made a lot of history this year, just within our team, and I think a couple nationally. Just making history is really cool. It's not something that happens all the time. That's why it's history. To do that and, obviously, it would be nice to leave my last game with a win.”

“Everybody definitely knows. Why not make a goal? Dream big. Shoot for the stars. We're not really -- you don't ever go into a game just hoping to squeeze out and win everything. You want to have a goal, something you can reach for to do it. You don't want to -- you don't ever want to go to a game thinking that was my last field goal. You go in the game thinking you can build the team out. Everybody knows what we could do and what's in front of us. It gives everybody something to strive for.”

Tanner Muse on if Clemson has an edge because of experience

“I think it helps me, just personally, because I'm on a loop. Every year I've been in this playoff and it's been awesome. It's just something I've definitely taken advantage of, just being here for this opportunity has been great to me. It helps me just let the young guys just hear my experiences and what I've -- the things that I take advantage of during this scheduling that we have. So definitely just my experience has helped everyone.”

Muse on Tyshon Dye and a scholarship

“I definitely was around. Tyshon, when I first got here, I had a really crap practice. He said, Hey, man. Keep your head up. Just keep grinding and you'll earn yourself a scholarship. I was so mad. I'm like, Tyshon, I'm on scholarship. And he's like Oh, that's what's up. That's my first interaction with Tyshon. But he's always been nice and super encouraging to me.”

Muse on why Dye didn’t think he was on scholarship

“Probably my skin tone and playing safety. You don't see many. But that was kind of his point. I ain't never seen no white boy play safety. Yeah, there's a few of us.”