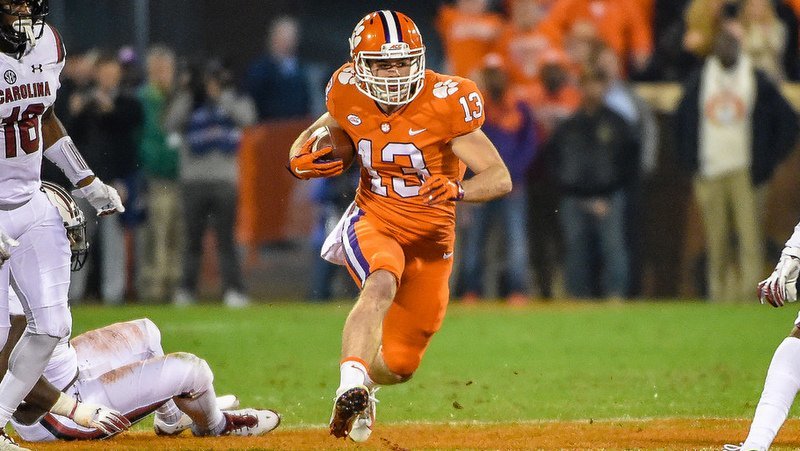 Clemson could have as many as four players drafted in the first round of the NFL Draft, but there are two players that many in the national media can’t stop talking about.

The first is almost a sure-fire first rounder and the second is a walk-on turned gridiron hero.

The NFL Draft will take place April 25-27 in Nashville, Tennessee and Clelin Ferrell will probably hear his name called at some point during the first round, while wide receiver Hunter Renfrow may have to wait until day three or take his chances as a free agent.

NFL Draft analyst Mel Kiper, Jr., said the combination of Ferrell’s motor and athleticism is what makes him appealing to most teams.

“I think for Ferrell – you look and say well he got a lot of help from the other guys up front and that’s true. There’s a great group of defensive linemen,” Kiper said of the Richmond (VA) native. “They went back to win a national championship and they achieved that goal, but his production over the course of the last few years from a tackle, tackle for loss standpoint has been outstanding. Even in the Alabama game when he got the big sack, he was unblocked. It wasn’t Jonah Williams he beat, he went unblocked. The kid’s got the length, and he’s got the productivity. I think he can certainly secure the edge against the edge. He’s probably 12 or 15 to 20, in that range. I have him going No. 16 to Carolina. They need an edge guy.”

Renfrow on the other hand seemingly came out of nowhere as he began his career as a walk-on, but finished as one of the most memorable wide receivers to ever attend Clemson University.

The Myrtle Beach (SC) native finished his career with 186 receptions for 2,133 yards and 15 touchdowns in 2,408 snaps over 55 games (47 starts), including the touchdown catch to beat Alabama in the 2016 national championship game. Renfrow owns the Clemson record for starts by a receiver (47) and consecutive games with a reception (43). He will leave Clemson fifth in career receptions and 11th career receiving yards and also set College Football Playoff records with 37 receptions and four touchdowns in seven career CFP games.

Kiper said he sees Renfrow as a combination of two highly regarded New England Patriot receivers and former Tiger Adam Humphries, who is currently with the Tampa Bay Bucs.

“Hunter Renfrow is a third-down specialist, obviously. The way he gets separation, you see a little (Wes) Welker and (Danny) Amendola in him at times,” Kiper said. “Keep in mind that Welker and Amendola didn’t get drafted coming out of college, both coming out of Texas Tech. Hunter Renfrow, you look at Adam Humphries who carved a niche in Tampa coming out of Clemson, there’s going to be a spot on a roster for Hunter Renfrow. It wouldn’t surprise me if he’s a combo Humphries, Welker, Amendola type in the NFL.”