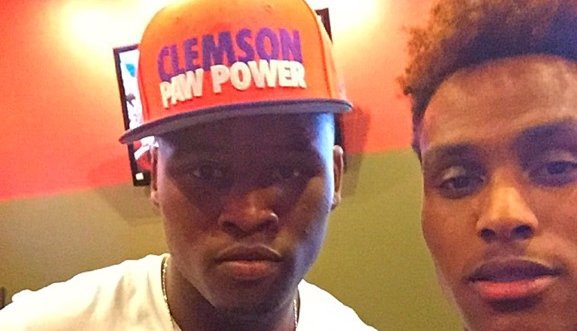 As it turns out, the Clemson coaching staff offered Felder – a three-star defensive back out of Baltimore (MD) St. Frances last Tuesday, but Felder didn’t find out until one of his coaches told him at Smith’s declaration ceremony.

The 5-10, 161-pound prospect committed to Virginia Tech back in February but recent offers by Clemson and Ohio State have made Felder rethink his decision.

“After I found out that I had the offer, I called Coach Reed and I told him that I heard I had an offer and he confirmed it,” Felder told TigerNet. “He was just talking to me and he told me that he had to talk to my mom about recruiting me and recruiting my family. I have a trip scheduled to come to Clemson for the 18th [of April]. I've been there before, but when I was down there I wasn't being recruited by Clemson. I also went to camp down there and they liked me a lot. I like the school. They were recruiting Shaq at the time, so I was with him.”

A trip to Clemson’s campus last summer was enough to make Felder want an offer from the Tigers.

“I came down there last summer. I got to work with Coach Reed at a camp and I talked to him a few times before I had the offer and he would always tell me the offer was on the way. He seems to be a straight up guy and I feel like I can trust him.

However, there is more Felder said he needs to learn about Clemson.

Felder claims a top three of Virginia Tech, Ohio State and Clemson and there are things that he likes about all three.

“What they can do for me as a defensive back is the biggest factor for me,” he said. “Virginia Tech - I have a good relationship with their defensive backs coach. There's a lot of honesty. It's a way to get my business done at Virginia Tech. Ohio State says that they will bring the best out of me and they tell me that I would have the chance to play in national championships and bowl games. It's a tough choice. Now that Shaq is at Clemson, I have to consider them. I like Clemson a lot.”

One of the biggest factors working in Clemson’s favor is that Smith is 100-percent committed and he and Felder have always wanted to be college teammates.

“I just saw the interview with Shaq and that's exciting. I would love to play with my brother,” Felder said. “I look up to him on and off the field, so that's a good feeling. We go back to the seventh grade or eighth grade. We like playing on the same team. He's always told me that he wanted me to play behind him as a defensive back.”