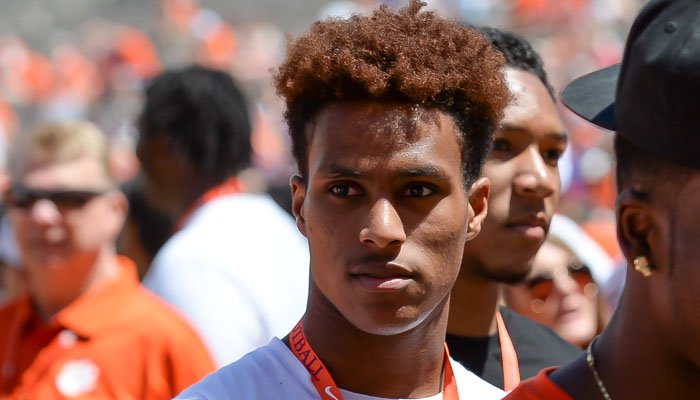 Felder on the sidelines before Saturday's spring game

After a trip to Clemson, Kareem Felder

View Full Profile has a lot to think about.

The 3-star Baltimore (MD) St. Frances cornerback made his first trip to Clemson since attending camp last summer to take in the Tigers annual Orange and White game this past weekend.

While on the visit, Felder was able to talk to the Clemson coaches, tour the facilities and meet up with former teammate and current 2016 Clemson commit Rahshaun Smith

Felder told TigerNet Sunday evening Clemson's campus completely blew him away from the moment he arrived.

"It was good. The campus is probably the best campus in the country," Felder told TigerNet. "I saw it last year over the summer and I was amazed by it. They are doing a lot remodeling and adding on to it. They just keep adding on and making it better. I saw the campus and met with Coach (Mike) Reed. He was telling me that he wants my mom to come down to the cookout so she can see all about Clemson. He talked to my mom about recruiting me over the phone. She didn't come down. It was me and Rahshaun and our coach."

During the day, Felder took in the spring game and said he paid the most attention to Clemson’s defense, especially sophomore cornerback Mackensie Alexander.

"It was cool. There were a lot of fans for a spring game. It was fun," Felder said. "I was pretty much just watching the defense. It was a good time. They do a good job with recruiting, overall. I was watching Mackensie the most. I think he's the best corner on the team, obviously. I liked him a lot. He seems to be real hungry. He wants to be the best. That was my first time watching him."

After the game, however, he was able to spend time with several Clemson players and see just what it means to be a part of the Clemson football family.

"We had a lot of fun. We stayed in Clemson overnight," he said. "I would say just chilling with the some of the people on Clemson's team was the best part. They really made sure that we were ok and they looked out for us, like they were family. Clemson just has a family atmosphere. They treat each other like family."

Felder claims 15 offers but Clemson, Ohio State and Virginia Tech are thought to lead for his services, but he said he needs time to think about his decision and hopes to update where things stand with his recruitment soon.

"I don't really know right now. I'm going to wait for two weeks and then I'll release the information. I just want to think about everything," he said.