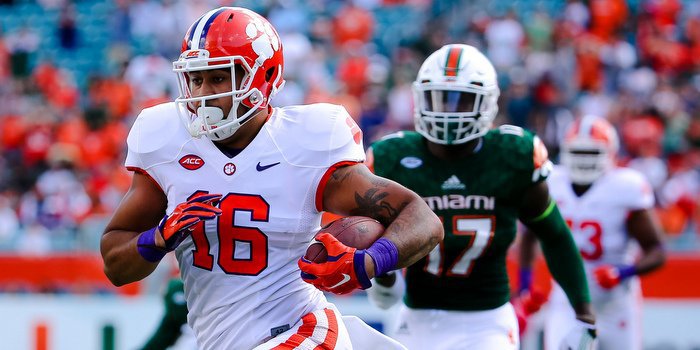 Clemson co-offensive coordinator Tony Elliott said the coaching staff challenges the offense every week to get off to a fast start.

The Tigers scored touchdowns on their first three drives Saturday against Miami and cruised to a 58-0 win. Clemson finished with 567 yards of total offense, surpassing 500 yards for the third straight game.

“We challenge them week in and week out to get off to a fast start. Obviously, we script the first couple of plays, and then after that we weren’t able to use all of them in the first drive, so we just kept rocking and rolling,” Elliott said. “It’s a testament to our guys. They come prepared. They’re ready to play. They understand the importance of getting off to a fast start. If we can get up ahead, it makes things tough on the other team because our defense is so good.”

Everything looked easy Saturday, starting with the running game. The Tigers had 63 rushes for 416 yards, an average of 6.6 yards per carry.

“It was one of those days when we were having some success in the running game,” Elliott said. “Any back that we put in there was having some success. The quarterbacks were dangerous with their legs. The offensive line, they were nasty up front. They were creating a new line of scrimmage. Any time you can run the ball, I wouldn’t say it makes it easy, but you’re able to control the game, and you get into a rhythm, and that opens up the passing game.”

The passing game certainly played off the running game against the Hurricanes, and Watson was efficient, completing 15-of-19 throws for 143 yards and a touchdown with no interceptions.

Ray Ray McCloud showed off his versatility with four catches for 36 yards and two rushes for 22 yards.

“One of the things we talk about as a staff when we break down defenses is, ‘What are they geared to stop?’ And we’re going to try to attack the area that they’re going to give to us,” Elliott said. “(On Saturday), we felt like we were going to be able to come in and run the ball. Now, if you said 400 yards rushing, we felt like we were going to have some success, but they kind of riled us up before the game, got our juices going, and our guys up front take pride in that underdog role that they’ve had all year, and they’re looking to run the football.”

“It will be the same thing when we get ready to go Monday. We’ll enjoy this. Look to the video and learn from it, but it’s a new week,” co-offensive coordinator Jeff Scott said. “We’re not going to add any points when we go out there to start off against N.C. State next Saturday.”