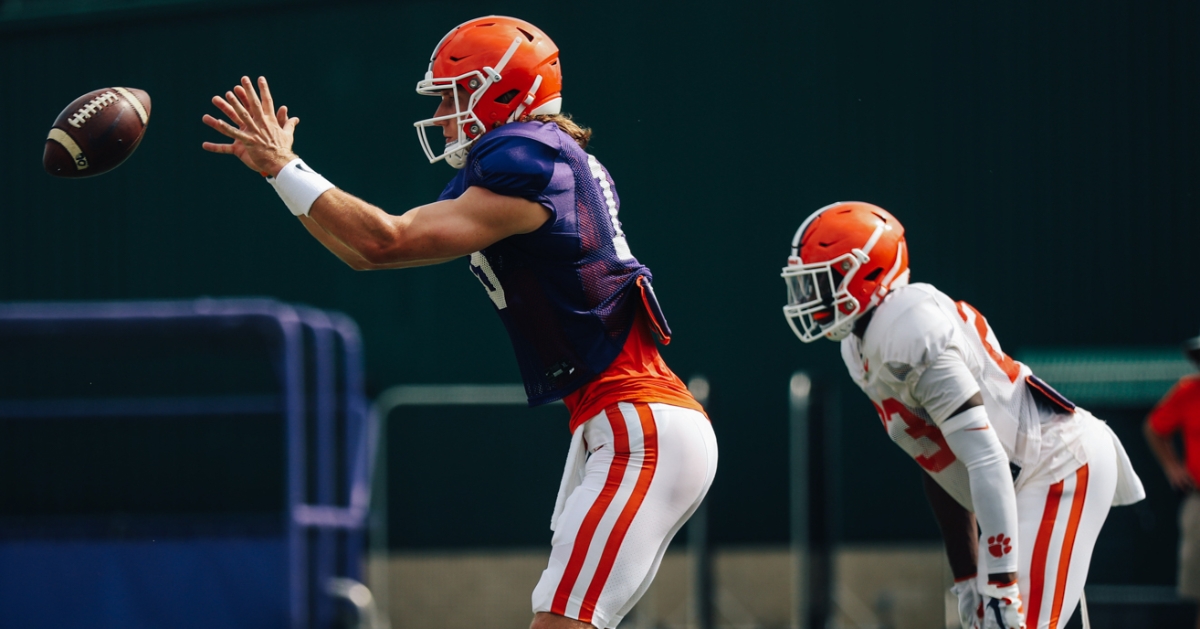 CLEMSON – Clemson head coach Dabo Swinney says his team is in a good place with three weeks still to go until the first game.

“We are in a good place. I am really glad we still have, not quite a month, but almost a month to get ready to play because we still have a lot of work to do today at Clemson,” Swinney said. “That is what next week will be about as well. We will come back and have another week of work on Clemson and have our last scrimmage next Wednesday. After that, the following week, we will start our game prep work.”

The Tigers still have a number of players missing practices and the scrimmage with an assortment of bumps and bruises. Even Swinney is feeling the effects of a hard two weeks as he deals with what he called “camp voice.”

“It is just that time of camp,” Swinney said. “We have not just been going for two weeks in camp, but these guys have been going mandatory since July 6. There has been lots of conditioning, lots of running, lots of training and then you get into camp and it is a grind.

“Then all of a sudden you get some shoulders, some ankles, some groins, and guys just banged up and stuff. But guys are slowly kind of coming back and I think now that we are breaking camp our guys will have a little more time. Our guys are committed to taking care of their bodies and they really do a good job of that in the cold tub and all the rehab stuff and the recovery stuff and nutrition.”

On the backup QB battle between Taisun Phommachanh and DJ Uiagalelei

“We’ve got two excellent prospects right there, two really talented (players),” Swinney said. “Taisun has been here a year, and he’s a little bit more of a developmental guy from where he started, but man he’s made huge strides in a year. Very talented. They’re different. They’re similar in some regards and they’re different as well. And then D.J., he’s just as advertised. He’s just a very gifted player. He’s 250 pounds. He’s just not a typical freshman coming in here, and then he has just really picked things up quickly. So, it’s a heck of a competition and a great battle, and they’re both doing some really good things.

“We’ve got a long way to go,” Swinney said. “They’re both competing every single day. We’ve got three and a half weeks to go, so every rep counts, every days counts. I will say this — regardless of how it plays out, I’m confident in both of them. We could win with either one of them, I really believe that. But obviously somebody’s got to run out there second, I guess, if we had to at some point. So, we’ll see how it all plays out.”

On dealing with a different schedule

"I feel like I've got my Ph.D. in planning. I did three schedules because I didn't know when we were going to start for the longest. Then I didn't know if our first game was going to be the 12th, the 10th, or the 7th. So I did three different practice plans, three different calendars. Of course, the original calendar ripped it up.” So it's been very different. Very, very different. Last year, for example, we started school on Wednesday and we played 10 days later. So this year we're breaking camp and start school tomorrow, we still have three and a half weeks. So it's, it's good, we've got a great plan. I'm thankful we have that time because we're not where we need to be. So I tweaked our camp to reflect where we are and what we've had to deal with."

“Trevor, it's just a joy to watch that No. 16. It's unbelievable. He's just at a whole, other level. Confident in everything about the game. Complete ownership of our offense. He is so disciplined post-snap. It's a joy, really."