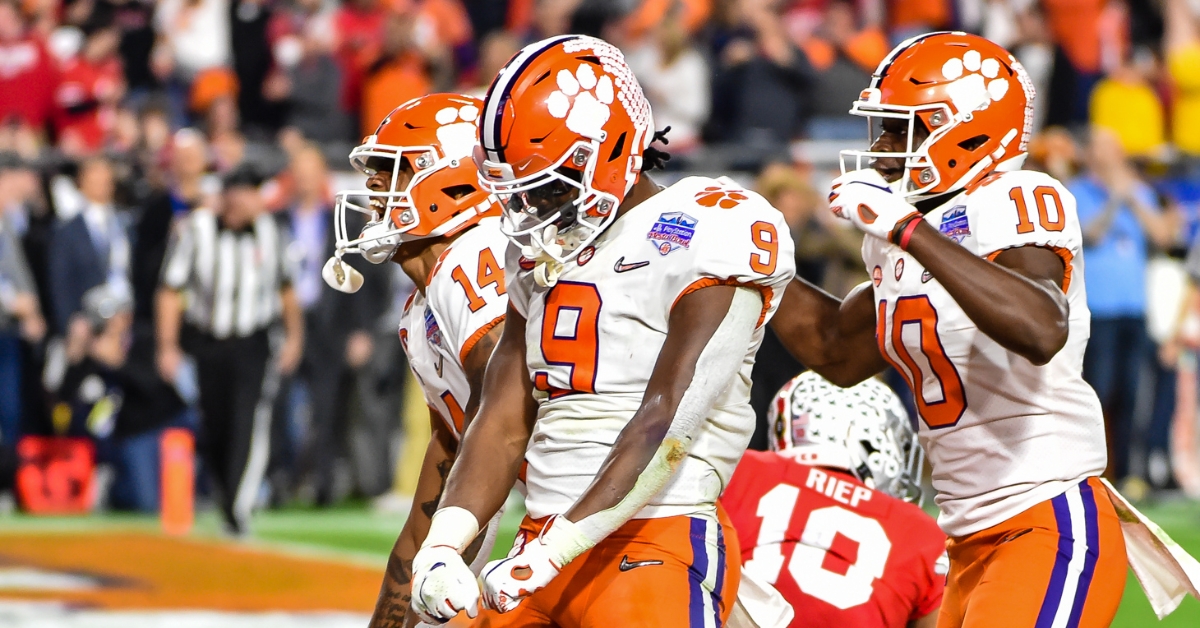 Etienne is a humble superstar.

Who gets the football? Travis Etienne, the Heisman Trophy candidate? The 5-star freshman? The super sophomores ready to take the next step? The talented junior with all the right moves? Welcome to Tony Elliott’s world.

Elliott, Clemson’s offensive coordinator and running backs coach, has the pleasure of trying to figure out which back gets the carries this season. It all starts with Etienne, of course, and he deserves the lion’s share of the load. But the others deserve a chance as well, making fall camp a critical time for those wanting playing time.

Montee Ball (Wisconsin) had 77 rushing touchdowns for second on the all-time list and first for running backs. Travis Prentice (Miami, OH) had 73, while Ricky Williams (Texas) and Kenneth Dixon (Louisana Tech) each had 72. A solid season might give Etienne the chance to vault into the top-five around the late-season Playoff push.

In fact, Devin Singletary sits at No. 6 all-time with 66 and if Etienne reaches that point he would have passed Cedric Benson (64; Texas), Ron Dayne (63; Wisconsin), and Donnell Pumphrey (62; San Diego State).

Whew. That’s a lot, but that’s what Etienne brings to the table.

It’s time for Dixon to take a step forward this season. In 2018, Dixon averaged an impressive 8.82 yards per rush on 62 carries and scored five touchdowns. As a sophomore, he was second on the team in carries (104) and yards (635) while adding 14 catches for 121 yards in the passing game. Dixon scored six touchdowns and saw his average per carry fall to 6.11.

Etienne liked what he saw out of Dixon in the spring.

"He's definitely flipped the switch," Etienne said during spring practice. "For me to keep my job I'm definitely going to have to go hard every play because I'm not entitled to anything even though I've had a successful career here. He's hungrier now more than ever."

Chez Mellusi (276 yards) and Michel Dukes (150 yards) are next in line, and if the depth chart ended there it would still be the best in the ACC and maybe in the country. But it doesn’t end there.

Swinney compares Bowman to another great Clemson back.

“He’s special. He’s another version of (CJ) Spiller,” Swinney said. “That’s pretty high praise. He’s a long way from that, but as far as just high school tape and explosiveness and track speed – legit track speed – the ability to catch the football… Every time he touches it, he literally can go the distance. Can return (on special teams) and those types of things. I think there’s a lot of similarities between the two coming out of high school. He’s a little thicker probably than C.J. was, but he’s got that type of explosiveness, and it’s easy to see coming out of the system that he’s been playing in.”

A unanimous top-26 national prospect according to the major recruiting services, Bowman amassed 5,081 yards rushing in three years at Lakeland (Fla.) High School, averaging an incredible 11.4 yards per rush and scoring 71 career touchdowns. He logged 26 games with at least 100 yards in his career and averaged 145 yards rushing in his 35 career contests.

Elliott thinks Bowman has a chance to be special.

“Very special,” Elliott said of Bowman. “Is probably going to draw a lot of comparisons to another great out of the state of Florida in C.J. Spiller. Has that dynamic speed, the ability to change the game at any moment. He’s a lot like Travis (Etienne) in that any time he touches the ball, he can go the distance.

“But what I really like about Demarkcus is he loves to run between the tackles, too. He’s a complete running back, can catch the ball out of the backfield. He loves the game of football. He’s already texting me, ‘What can I learn? I’m ready to get there, I want to make an immediate impact.’ So, really, really excited about him.”

Don’t forget about Pace, a running back the Tigers took out of Georgia. Elliott says Pace will be Thunder to Bowman’s Lightning.

“When you go into Cedartown, that's Bulldog country, that is the home of Nick Chubb,” Elliott said. “And what I like about this young man is he's so humble. He is such a hard worker. And if you notice, the last couple of guys that we've had in the running back room have come out of a little small country towns. He just has an edge to him, and I think he's a great complement to Demarkcus. You have Thunder and you got Lightning, but this guy is very very elusive as well for a big guy. He catches the ball well out of the backfield and played some quarterback. So, I think that you guys are gonna be excited about Kobe Pace.”