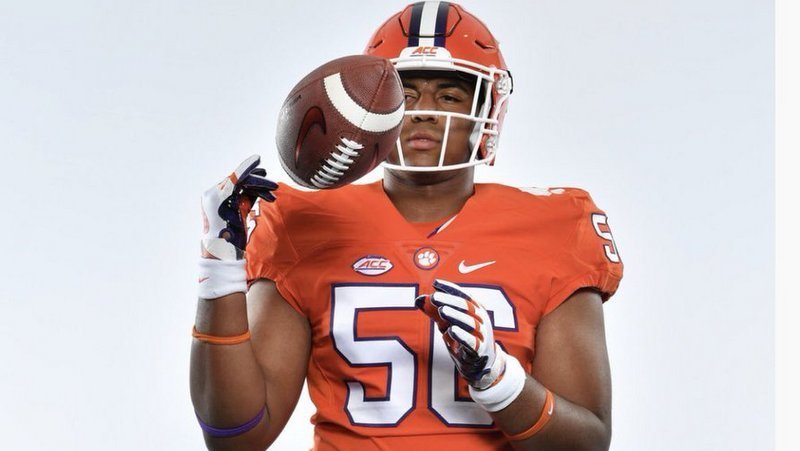 Kaleb Boateng had multiple offers from programs around the country, but his recruitment came to an end when Clemson head coach Dabo Swinney called.

The 3-star offensive lineman out of Fort Lauderdale (FL) had a final three of FAU, Arizona, and Maryland and was poised to picked one of those schools. However, after taking an unofficial visit to Clemson for Junior Day in early March, he, Tigers offensive line coach Robbie Caldwell and defensive coordinator Brent Venables stayed in contact throughout Boateng’s high school season, one where Fort Lauderdale won nine games and reached regional semifinals.

Boateng still didn’t have an offer from the Tigers, at least until Clemson’s head coach made a surprise call.

“They had been talking to me throughout the season a little bit, just checking out how I was doing in games,” Boateng told TigerNet Tuesday. “This past Friday the coaches asked me to send all of my transcripts and everything and then later that day I got on FaceTime with Dabo Swinney and he offered me.

“Recruiting as a whole was not overwhelming but stressful because the way recruiting works. I'm so grateful for the opportunity. I was kind of shocked right after.”

“To be honest, I told them the next day but when I talked to them on Friday, I knew I was probably going there,” he said. “I would say the number one thing to me is the whole program is a family. One major thing is academics. They aren't just setting players up for the league. I know they have the PAW Journey program, which is very elite. Team bonding, the entire program is always hanging out together and doing stuff and I feel like the people you hang out with off the field builds chemistry on the field, so that's a huge thing to me.”

Boateng said the three finalists understood why he made the late decision to choose Clemson.

“They definitely respected it. I think they understood just because of what school it was,” he said. “The other two schools - Arizona and Maryland - they took it as well as they could have. I think all of the programs that were recruiting me - small or big - has made it a great experience.”

Next up? A January 6th move-in date in Clemson as an early enrollee.

“I feel like some people would say that if you wait you can develop more, and your first impression will be better but I trust that the staff can prepare me better than I believe I can prepare myself from a physical standpoint,” Boateng said. “Also, you get to start college earlier and you get your credits going. Physically, you get better. You get to go through a spring semester and you can start learning the playbook. That's a huge thing. Gaining chemistry with the rest of your brothers in your position group.”

Boateng said he would do whatever it takes to get on the field.

“I'm pretty sure at Clemson I’ll be an interior lineman - center or guard. I'm just trying to help the team as much as possible. If the team says, 'Hey, we need you to long snap,' I'm going to figure out how to long snap,” he said.

What does the chance to play for a program making its fourth trip to the College Football Playoff mean?

“I think my dad was very happy for me because when I came back from the trip with my coach and two teammates, my dad knew I really liked the place just based off of how I came back feeling,” he said. “I can see it as a prideful thing if a school like them believes in me. I have something to prove because I think there are a lot of other schools who just passed on me that were also higher ranked schools, in state especially. I look forward to helping the team with overall continued success.”