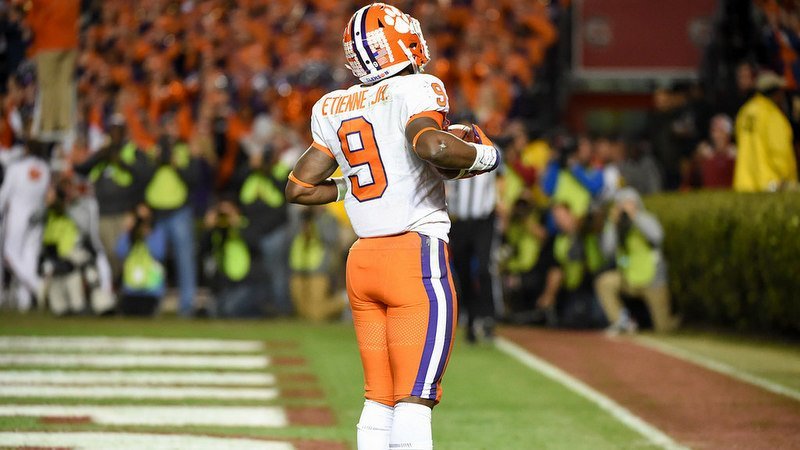 CLEMSON – Travis Etienne knows all about New Orleans and the culture that resides deep in the heart of Louisiana. Most of his teammates have no idea what they’re getting into.

No. 1 Clemson travels to New Orleans next Wednesday as they prepare to take on No. 4 Alabama in the Allstate Sugar Bowl. It’s a homecoming of sorts for Etienne, who grew up in Jennings, Louisiana, a small town about three hours from the Big Easy.

For his teammates, Etienne has some advice.

“Expect the unexpected. It's going to be a different type of culture for them,” Etienne said earlier this week. “It's going to be different than what they're used to, so just adapt to it and try to hone in to what they are doing. Being from there and coming here, I've noticed a lot of differences in the culture. Expect a different culture. It's been fun to answer different questions and see what people think of Louisiana. It's neat to see their perspective.”

The freshman running back said he can’t wait to get back home.

“It is most definitely is a dream come true for me,” he said. “Growing up watching The Saints and watching Reggie Bush all of the time in the Superdome and now I get to go try and imitate what he's done there. I love getting to go home and my mom isn't going to have to drive far to the game. My dad and grandma are all coming to see me play. It will be great to have all of my friends and family there supporting me.

“Twenty people have asked for tickets and you can only get so many. You want as many as can to come to the game, but it's hard to get tickets, but it all worked out for the best. Most everyone is trying to go to the game and hopefully we can get everyone there. It will be like back in high school and everyone cheering you on with a bunch of familiar faces in the crowd.”

Etienne has never played in the Superdome – his high school team didn’t make the state finals – so getting to play in New Orleans is something he’s always wanted to do.

He also wants to have the game of his life when his team needs him the most.

“I think all competitive football players dream of that moment. They dream of having a dominant game and putting their team in the best situation. That's what everyone wants,” Etienne said. “Like a baseball player, 2 outs, you're down by one, the bases are loaded and you step up to the plate - you have to be ready for that moment and not take it for granted. Game tied in the fourth with two minutes left to go and I'm able to break one to propel us ahead to win the game.”